A Movie You Might Have Missed #83 — A Taxi Driver 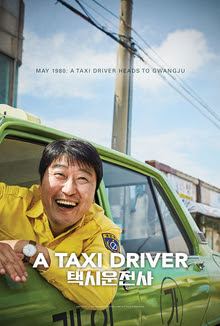 In 1980, a foreign journalist hires a down-on-his-luck taxi driver to take him to Gwangju, South Korea. They soon arrive to find a city under siege by student protesters and the military. A Taxi Driver brings a ground-level perspective and a refreshingly light touch to a fact-based story with sobering implications.

I'd never heard of this 2017 movie which was wildly popular in Korea and was their entry to the Oscar foreign film nominations that year. Knowing only the brief description above and having a vague memory of Korea as having military dictatorship issues in the 1980s we launched into the movie.

As with the Indian movie Airlift, we were introduced to a piece of history we had never heard of. It turns out that the taxi driver, Mr. Kim, is the perfect character through whose eyes we should view the military lockdown of Gwangju. He also had no idea of the violence being perpetrated upon the protesters and innocent civilians. Following the reporter as he follows leads to the heart of the riots, the depth of the violence and oppression gradually unfold. We get to meet other taxi drivers as they help first with repairs and then with more important things. As the story goes on,  the driver begins seeing a bigger picture than just his own interest and that everyone, however seemingly insignificant, plays a part in others' lives.

Based on a real event, this is a combination of fact about the photographer and fiction about the driver.  Kim's identity was unknown when the film was made so his story is fictional aside from his time with the photographer. Nevertheless, it is very effective and provides both a much needed lighter approach and "everyman" view which takes the audience along.

I came away grateful for good reporters determined to get the truth to the people. I also thought of the war reporters who have been dying in Ukraine. And I was reminded of how desperate the Ukranians' plight is, even as they fight with all they have. Those trends were personified in this movie.

As I mentioned, this reminded me of both Airlift and also of Argo. Fans of those movies will not be disappointed.

Homer:
You must love this country more than I love a cold beer on a hot Christmas morning.

Most women are attracted to power and status, but then the stars don't need to tell you that, Mr. General Manager of the Court Street Baskin-Robbins.