Reclaiming Vatican II: What It (Really) Said, What It Means, and How It Calls Us to Renew the Church by Fr. Blake Britton 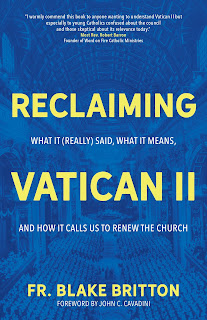 During the past five decades, the Second Vatican Council has been alternately celebrated or maligned for its supposed break with tradition and embrace of the modern world. But what if we’ve gotten it all wrong? Have Catholics—both those who embrace the spirit of Vatican II and those who regard it with suspicion—misunderstood what the council was really about?

Short review: simply excellent. Inspirational as well as informative. All Catholics should read this book.

I have enjoyed listening to Father Blake Britton on the Burrowshire podcast which he does with his friend Brandon Vogt. I was intrigued by the idea that he'd written a book and had it preordered but was lucky enough to get a review copy. It was everything I hoped for and a whole lot more.

This book does just what it says on the subtitle. With genuine understanding of what motivates both sides,  Britton clarifies why there are misconceptions (and misapplications) of Vatican II both by liberals  and conservatives. That is no small feat. By looking at why the council was so misunderstood, we see that both liberal and conservative groups are responding to "the paracouncil."

The paracouncil resulted from theologians (who may not have even been at the council), the media and turbulent, secular influences. These combined to skew the intentions of the Vatican II council into something that is loosely referred to as "the spirit of Vatican II." I'd heard the phrase but never paid enough attention to wonder why it was used. After all, if someone said "the spirit of the Bible" we'd go  take a good long look at the Bible to see what it really said. No one was doing that with the Vatican II documents. I realized that's like saying "it's the vibe of the thing" which is always dangerous when dealing with the faith.  The paracouncil is the reason for the iffy implementation I've noticed in a lot of parishes.

Britton walks us through the reason for the council and the major documents. As he does, we get context from ancient and modern times, what was (and wasn't) included, and thoughtful ways to help implement the true teachings of Vatican II in parishes. Along the way, he shares personal experiences as a parish priest which bring it all to life.

I was left with a profound respect for the council who so skillfully balanced Catholic tradition with the need to renew the practices of the Church so that the people have passion and vigor in their faith. I was left inspired by the council's goals and the examples of instituting proper practice in modern parishes.  I'm lucky enough to worship in a beautiful church that has a profound respect for the liturgy, including the music. Here are some of the things that Vatican II added, some of which I knew and some of which I didn't. All of these are implemented in our parish and which I'm profoundly grateful for!

Reclaiming Vatican II is simply excellent. It is inspirational, informative, and easy to read and understand. All Catholics should read this book.