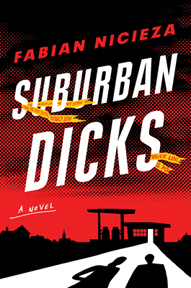 Once a budding FBI profiler, Andie Stern gave up her career to raise her four (soon to be five) children in West Windsor, New Jersey. But one day, between soccer games, recitals, and trips to the local pool, a very pregnant Andie pulls into a gas station--and stumbles across a murder scene. An attendant has been killed, and the bumbling local cops are in way over their heads. Suddenly, Andie is obsessed with the case, and back on the trail of a killer, this time with kids in tow.

She soon crosses paths with disgraced local journalist Kenneth Lee, who also has everything to prove in solving the case. Hilarious, insightful, and a killer whodunit, Suburban Dicks is the one-of-a-kind mystery that readers will not be able to stop talking about.

This is a book of contrasts. A light, humorous tone is counterpointed by the dark roots of the motive for the murder of a young, simple Indian gas station attendant.

Likewise it plays with a lot of mystery tropes like two losers who wind up solving a murder — only they are actually people with very successful backgrounds who have found themselves at low points of their lives. Andrea was a profiler who caught a serial killer but who now is a housewife with four kids and one on the way. Kenny won the Pulitzer Prize very young for journalism and has gone nowhere but down, now working on a surburban newspaper. The murder is not only a chance to reestablish their self worth but the investigation makes both feel alive again.

We could look at this as the suburban mystery where the housewives who are friends band together to gather clues. Yet, these women are not not really good friends and in some cases haven't met until the story begin. They are all motivated by different things, all of which tie into the murder or their own lives.

The past matters a lot, both to the investigators and to the mystery but we aren't dragged through info dumps. In fact, often small facts are sprinkled through someone's thoughts which give us a clue as to personal relationships, Andrea's with her husband for example, but the big picture is left to unfold naturally. That's a relief because I don't really care about Andrea's and Kenny's pasts more than the author tells us.

Also there is the topic of racism, both systemic and personal, which would normally make me steer a mile away from this book. However, the touch is light without being glib. And because the story is so rooted in Andrea's and Kenny's personal stories, it is a factor without taking over the narrative.

As I said, this is a study in contradictions and perhaps that is what makes it work so well. It is a story with characters we like, a murder that is interesting, and a funny tone which pulls it all together. You'll know early if it is your kind of book. The introduction is what grabbed me and it will either do the same for you or turn you away. Highly recommended.