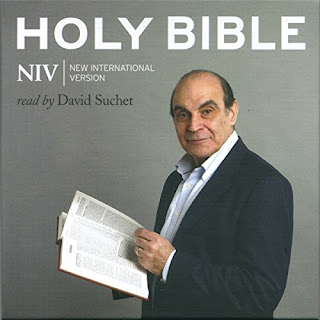 This is 83 hours (and 14 minutes) of wonderfully narrated Biblical audio goodness.

I'm here for David Suchet who, 17 chapters into Genesis, is helping me hear details I hadn't noticed before. Part of that is doubtless because I've not read the NIV translation before. However, it is equally due to the fact that listening to a book makes you notice new details.

As a sidenote, I only discovered this narration after learning that Suchet (who definitively played Hercule Poirot in BBC productions) became a Christian at 40 and then wanted to record the Bible. He did it in between shooting schedules and in his off time for over 200 hours of personal dedication. So inspirational!

Right now I'm thinking that I may use this for another reread of the entire Bible in chronological order. Except, of course, for the books the Protestants took out. Those aren't included in this so I'll read them the old fashioned way from one of my Catholic Bibles.
By Julie D. at August 31, 2020