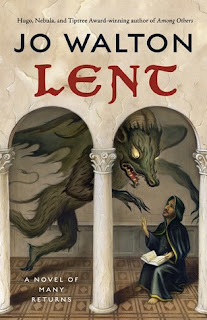 Young Girolamo’s life is a series of miracles.

That’s only the beginning. Because Girolamo is not who—or what—he thinks he is. He will discover the truth about himself at the most startling possible time.

How do I write about this book? It feels like a work of genius and I am badly in need of someone to discuss a few things with. However, until I have a friend who has also read it, this inadequate review will have to do.

The book description tells the story just adequately enough to give you a sense of the atmosphere without spoiling the story. The main character, devout and talented priest Girolamo, can see demons and cast them into Hell. He's got the gift of prophecy. He is also a most appealing character as we watch him try to make Florence into the Ark of God.

This seems an unlikely topic for fantasy writer Jo Walton but she does love to take a topic and dive deep while she adds fantastic layers which enliven while adding insight to the main theme. Consequently, Lent is a melange of 15th century Catholic theology, Florentine and Vatican politics, demons, Hell, metaphysics, and friendship.

Above all, surprisingly, it is a meditation on what it means to love God and what it means to be threatened with losing Him. I've seen a few reviewers say they're unclear about the point of the book, but to this Catholic it seems clear. And I like what I see. Even if you don't agree with me, you will be left with a lot of food for thought wrapped in an entertaining story. Highly recommended.

EXTRA
These images and comments from Jo Walton are fascinating. Best viewed after reading the book so no spoilers creep in.
By Julie D. at June 10, 2019