God Through Binoculars by Danusha Goska 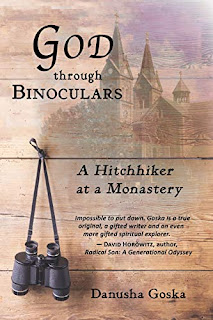 A spiritual memoir and travelogue, God through Binoculars: A Hitchhiker at a Monastery is about where you go when you have nowhere left to go. After a difficult childhood and a series of tragedies and misfortunes, author Danusha Goska finds herself without hope for the future. She decides on a retreat at a remote Cistercian monastery. What results is a story about family, friends, nature, and God; the Ivory Tower and the Catholic Church.

I read God through Binoculars at breakneck speed. Danusha sent me her document some time ago when it was still just her journal notes, as she put it, disclaiming any notion of publishing. I read it in a day and urged her to look for a publisher. Now that it has indeed become a book I find it just as gripping and hard to put down. The problem is how to describe what makes it so compelling.

Danusha's book is as hard to pin down as quicksilver. She grabs you by the hand to veer from personal stories to sightings on a walk to evolution to God's love for the predator and the prey and then darts onward in a way that leaves you breathless but willingly running to keep up. At times there is a stream of consciousness aspect that is nonetheless fascinating. It is all permeated with humor, self awareness, and a sense of God's small, still voice.

Perhaps most valuable this book challenges the reader about their own assumptions, albeit from a devoutly Catholic standpoint. Although just because she's a devout Catholic doesn't mean Danusha doesn't occasionally rage against the machine. As she contemplates the hawk and the squirrel, pinworms and the Spirograph, hyenas and new socks, we are called to consider the inner truths such things point toward ... and share Danusha's pilgrimage.

I love Danusha's absolute honesty. She puts it all out there for us. It can be occasionally raw, politically incorrect, and distressing. Have you read the Bible lately? She's in good company. There are also transcendent moments that inspire and open the way for God's grace.

This would be an excellent book for Lenten reading. Or for anytime.
By Julie D. at February 22, 2019