From Fire By Water: My Journey to the Catholic Faith: Sohrab Ahmari 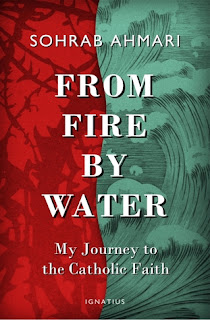 My native land smelled of dust mingled with stale rosewater. There was enjoyment in Iran and grandeur of a kind, to be sure. But when it wasn't burning with ideological rage, it mainly offered mournful nostalgia. Those were its default modes, rage and nostalgia. I desired something more. ...

The Iranian way was irrational. It wasn't modern. "Rational" and "modern" were my watchwords from a very young age. I had fuzzy notions of what these terms meant, but this merely magnified my enthusiasm for them. If the Western way was better than the non-Western, then America was best of all. America was the vanguard of Western-ness. The fact that all our leaders constantly denounced the evils of "Waa-shang-ton" was sure proof of this. America stood at the forefront of the modern and the rational, and that was where I belonged.

If you had told me, before I set out, that decades later I would find the heart of the West somewhere entirely different—in events that took place on a dusty, blood-stained hilltop on the outskirts of ancient Jerusalem—I would have cackled in disbelief.

Sohrab Ahmari was the spoiled darling of his intellectual, liberal Iranian family. Immigrating to Utah, he was rapidly disillusioned about his ideas of a secular, rational, modern America. Searching for meaning, he discovered Nietzsche, as so many have done. Ironically, that began a very long process that ended in the Catholic Church.

As well as being a personal journey, this book almost serves as an overview of modern man's search for meaning. Ahmari moves from Nietzsche to the existentialists to Marxism and politics. His own experiences under the Iranian regime and with life in general reveal flaws in all these philosophies even as he devotes himself to secularism with ever increasing fervor. And it is through these cracks that Ahmari experiences epiphanies which gradually lead to recognition of the truth of Jesus' sacrifice as necessary for salvation.

This is a very readable book and I was fascinated by the continual backdrop of Iranian culture which so often informed Ahmari as to the truth or falseness of different philosophical theories. I really loved the last fourth of the book when names like Robert Alter, Pope Benedict XVI, and Augustine began popping up. Now we were in the same wheel house of intellectual and philosophical influences.

I also found Ahmari's deep understanding of the Fall and Christ's passion and sacrifice to deepen my own understanding. I reread the last part of the book twice for this very reason. Ahmari feels bad because he denied Christ for many years past when he should have converted, but to see his matter-of-fact embrace of such facts provides a witness that is all the more powerful for knowing his story.

Angie:
I've never been so disrespected in my life! And I've been to, and worked at, the post office.

Jupiter is in your sun sign this week, making it pretty crowded in there, what with Jupiter being the largest of the planets and all.