So You Stopped The Apocalypse. What Are You Going to Do Now? Reviewing "Mercury Rises" by Robert Kroese 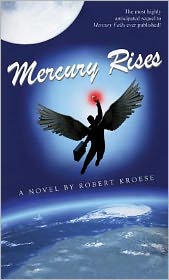 Finch went on, "If these people spent as much time trying to develop a written language as they did making up deities, they wouldn't be in this jam. they've got rain gods, cloud gods, sun gods...I've documented three hundred different deities so far, and I'm not even close to covering them all. At this point there are probably more Tawani deities than there are Tawanies."

In fact, the Tawani only had seven gods and goddesses in their pantheon; the remainder they had made up just to screw with Horace Finch. Finch had made it his mission to debunk their mythology, one deity at a time, and the Tawani had cleverly responded by manufacturing an unlimited number of deities. At first it had been an enjoyable diversion, but as Finch showed no sign of tiring his debunking, it had become something of a chore. More worrying, they were on the verge of running out of natural phenomena that could be used as an excuse for supernatural intervention. Lately they had devised gods of acid indigestion, night sweats, and chafing, respectively. ...

In truth, they had started inventing deities in an attempt to determine whether Finch could tell the difference between a real god and a fake god, a test that he decisively failed in their eyes. ...

The Tawani had also concluded that anyone who wanted so badly to believe that the gods did not exist must have done something very evil in their sight.

This sequel to Mercury Falls picks up after journalist Christine and rogue angel Mercury have stopped Armageddon from happening. And it picks up in Babylon around the time of Noah where we see just what Mercury's relationship with Tiamet was and why she's so interested in ziggurats. Following a dual timeline, we get the long ago backstory and the ongoing new attempt to destroy the world, where a few new characters get added to the mix.

This is clearly a transitional novel and Kroese is working toward a third book that will pull everything together where we eventually will see who is really running things in Heaven, whether free will is integral or a mistake, and if there is an ineffable plan that will leave Earth in one piece. I sped through this book which was almost as entertaining as Mercury Falls. Sometimes though, as Stephen Tobolowsky termed his role in Heroes, we feel as if we are still stuck in Act I. We've seen everyone try to stop the end of the world before. The dual timelines do not always transition gracefully and the number of characters left me sometimes feeling that the story was choppy.

Make no mistake, I still enjoyed reading this book. Kroese is clever, witty, and makes many good points about the people on both sides of religious belief (as we see in the excerpt above). I'm looking forward to seeing what the third book in the trilogy brings as Christine, Mercury, and the gang hopefully can finish their task of putting the kibosh on an immediate apocalypse.

This book was provided through the Amazon Vine program.
By Julie D. at October 19, 2011