On Monster Patrol: Reviewing "Night of the Living Dead Christian" by Matt Mikalatos 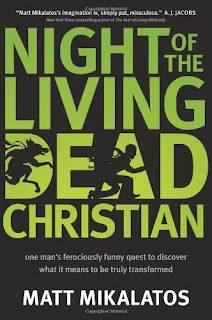 ... I had that sudden creepy feeling that something truly horrible stood drooling over my shoulder, and with a fear-fueled shout I spun around only to discover my neighbor Lara.

Lara and I had gone to high school together, so it was this weird thing that she lived across the street now. Weird in the sense that I couldn't help but feel a little bit less like an adult when she was around. She had her long, dark hair swept down, and a tight pair of dress slacks on, and a white collared shirt, and a black cape. Her skin looked pale, I assume because she was frightened of zombies.

"What's all the racket?" she asked. "I heard this horrible noise in the neighborhood, and then when I looked outside I saw all those people dressed like zombies."

I laughed. "Nothing to worry about. I scared them away by pretending to be a vampire."

Now Lara was laughing too, and I noticed her thin, sharp canine teeth. It seemed a little sad to me that Lara had tried on her Halloween costume a week early, but she was single again and I knew she was lonely and bored sometimes. You going to be a vampire for Halloween?"

"What's with the teeth then?"

She blushed. "A vampire pirate."

Matt Mikalatos has a problem. His neighborhood is overrun with monsters and he's the captain of the neighborhood watch. He meets zombies, a mad scientist and his robot, vampires, werewolves, and more. Eventually he even befriends a few of them and discovers a secret. They were all human once. In fact, they are all human now. Underneath their monstrous forms, there are humans waiting to be transformed into their true selves.

More serious are the interludes where Luther the werewolf records his innermost thoughts. These are the sections where Mikalatos is challenging readers to dig deeper and take a good, hard look at their lives, their actions, and their faith.

The quest undertaken by  Matt and his friends is an entertaining journey that leads to sacrifice, redemption, and ultimately the savior who transforms us all, Christ.

Monsters have long been the storyteller's device for examining the problems that we all face when, as St. Paul says in Romans 7:15, "What I do, I do not understand. For I do not do what I want, but I do what I hate." Mikalatos uses this metaphor to good effect to show Christians new ways to look at their own behavior and where they are denying that they need Christ's help to die to self.

The author doesn't just look at how people live their lives. He also examines types of worship and churches as well. I admit that made me rather wary, knowing that Mikalatos was writing primarily for nondenominational Protestants. However, the two times that Catholics were briefly mentioned, Mikalatos made sure that they were properly understood, as far as he himself understands the Catholic faith (more on that below in the Comments for Catholics). He also took the stance which Catholics believe and affirm, that people are good underneath everything. As Peter Kreeft puts it, we are like masterpieces with big scratches on them.

The ground that is covered isn't necessarily new. Anyone who regularly practices self-examination of conscience will recognize many of the points made. However, trying to rid the neighborhood of monsters is a device that may make the most self-aware Christian realize there is something that is not reflecting properly in the mirror ... and take another look.

Mikalatos wrote a book that is laugh-out-loud funny and that had me pestering family members to read amusing passages. He also has an engaging way of shaking up readers to look at their own lives with fresh eyes. I enjoyed the book very much and feel it can offer a lot to Christians when used for personal discernment about their walk with the Lord.

There were a couple of things that Catholics would need to be open-minded about which I address below.

COMMENTS FOR CATHOLICS ... contains a couple of spoilers
1.
In one spot, the mad scientist is trying to clone Jesus using a chewed communion wafer and wine stolen from a Catholic Church. Mikalatos points out that this is a misunderstanding of transubstantiation to think that Jesus could be cloned from these. It is never stated whether the wafers and wine were consecrated before they were stolen, the theft of which would have constituted one of the gravest of mortal sins. In fact, it is a supreme desecration that gave me a nasty jolt when I read it because the host was somewhat chewed  ... so I couldn't assume that consecration hadn't taken place. However, it is clear from the way that the story is written that the author is not trying to upset anyone and it is actually a logical leap for a scientist to make. Especially a "mad" one.

2.
In the end, every church the group of friends tries winds up having a serious problem. There is no church that doesn't have some sort of doctrinal error, whether real or misunderstood by one character or another. Eventually, "church" seems to be a gathering of friends and family by a river for baptism.

Now, there isn't necessarily anything wrong with that scenario for a lot of Protestants, but for Catholics the Church can't be cast aside so easily. Even Catholics who regularly criticize the Church recognize that there is great good that comes from her ... or they would leave. The Catholic point of view is that your family isn't your church, your Church is your family.

Catholics' love for their Church and her teachings goes far beyond the book's "zombie" church where everyone blindly obeys what the founder/pastor has written in his study Bible. Again, it is made pretty clear that the author isn't taking shots at any one group, at least as far as I can tell. He is just addressing believers who turn off their brains at the church door and blindly follow whatever they are told. That's a definite no-no in the Catholic faith where we are called on to be sure we understand the Church's teachings. I'd bet that every Catholic priest and bishop would laugh at the idea of parishioners who blindly do what the Church teaches without questioning it, even as they obey.

Although the author seems to cast off any sort of organized religion, in the end this story is the quest of a group of friends for individual transformation and that is how I chose to read it. Your milage may vary.
By Julie D. at October 20, 2011