The Angels and Their Mission: According to the Fathers of the Church 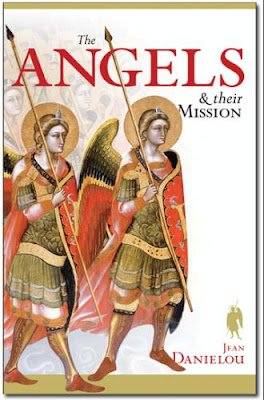 Thus, the mystery of the Ascension completely amazes the angels of heaven. for what it reveals to them is really a mystery, hidden up to then, an entirely new reality, disconcerting at first glance. The cosmological presentation of the descent and ascent must not deceive us. The true mystery of the nativity is the self-abasement of the divine Person of the Word, a "little lower than the angels." And the true mystery of the Ascension is the exaltation of human nature above all the worlds of the angels. That is the real double mystery which is dramatically represented by the descent and ascent in the midst of the choirs of angels. But this "dramaturgy," as St. Gregory Nazianzen calls it, must not conceal the reality it bears beneath it. It represents an overthrow of the natural order of things resulting from the revelation of a reality absolutely new and unforeseeable. That is why it throws the angels into a state of astonishment.

Perhaps this is something you already knew. I thought I had read a lot about angels and I was in a state of astonishment having read it as ... well, not as great as the angels mentioned above ... but I was pretty darned astonished. I have presented here only the essence of the passage and the careful reader will want to get the book and read all the thinking from the Fathers for themselves. However, I am left asking myself just how our current writings about angels have gotten so flat and boring when there is such richness in what the Fathers of the Church have already mined for us to consider.

The late Cardinal Jean Danielou was interested in considering the role of the angels in the economy of salvation. This prompted him to study the the Fathers writings and examine at the role of angels from the beginning of history. For is not history the story of salvation, at least as seen through the lens of faith that the Bible? The results are, as I have mentioned, rich and inform us about many things that we may never have considered such as angels, world religion, and why many religions may share a few common elements and then widely diverge. Fascinating. Completely logical.

When I mentioned some of the things I had learned from this book in passing to our learned priest, his face lit up and he instantly began chiming in with the same information that I was reading in the book. Obviously, the knowledge is being taught somewhere, just not to those of us with more mundane habits. This slender volume is just the ticket to fill in those gaps.

This book is not light, bedtime reading. However, neither is it so dense that one cannot struggle through. As evidence, consider that I devoured it in a few days. It does require attention and some thought but it is well worth it.

For instance, as a more prosaic example, I never thought about why the Church prayers for the dead may mention ... yes ... angels.

It is hardly astonishing then, that the Fathers of the Church picture the angels assisting the soul at the moment of death and leading it to paradise. Tertullian writes in De Anima, "When, by the force of death, it [the soul] is snatched from the weight of the flesh that closed it in, it trembles with excitement to see the face of the angel, the summoner of souls, realizing that its eternal abode has been prepared." The same doctrine often appears in Origen. Pseudo-Justin writes, "Immediately after the soul leaves the body, there follows a separation of the just from the sinners. Then they are led by the angels to the places they are deserving of ... John Chrysostom says, "If we need a guide in passing from one city to another, how much more will the soul need someone to point out the way when she breaks the bonds of flesh and passes on to the future life."

That is why the prayers for the dead invoke the assistance of the angels. These prayers present a twofold aspect. On the one hand, the guardian of the soul is asked to accompany it during its voyage to heaven. ...

Secondly, the angels of heaven, the guardians of paradise, are asked to permit the soul to enter there. Here once again we find that there are two groups: the angels of earth and the angels of heaven. Just as the liturgy invokes the angels who lead the soul into paradise, it also contains allusions to those who welcome the soul there. The Apostolic Constitutions contain a prayer for the dead that is drawn up in this manner: "Cast thine eyes upon thy servant. Forgive him if he has sinned and make the angels well disposed toward him."