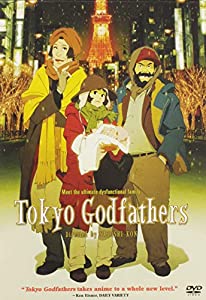 Here's a movie for Christmas that I reviewed way back in 2004 and can practically guarantee you have missed.

This Japanese tribute to John Ford's western "3 Godfathers" is fresh and original in a way that Western animation does not even consider. It centers on three homeless people: a middle aged drag queen, an alcoholic former bicycle racer, and a teenage runaway girl. Their discovery of a baby in a trash dump sends them off to find the baby's parents. They make unlikely guardians, of course, and along the way they grow, chiefly by confronting each other and themselves about the lies they've told each other about the past. Hana, the drag queen, names the abandoned infant Grace and insists that she has been sent by God. Coincidences and miracles happen increasingly throughout and seem surprisingly Christian for a Japanese film.

The juxtaposition of humor and drama are deft and play off each other in unexpected ways. At one point Hana is dramatically describing how he will commit suicide by jumping off a bridge. We have been primed by this time to find Hana's pronouncements quietly comic. Then the viewer realizes that someone in the background is taking the exact measures that Hana describes. Both humor and drama are in play as they also realize it a beat later and rush to stop the person from jumping. We never were disappointed. Although one expects an overall happy ending the plot twists on the way were original and unexpected.