Three Philosophies of Life: Ecclesiastes—Life As Vanity, Job—Life As Suffering, Song of Songs—Life As Love by Peter Kreeft 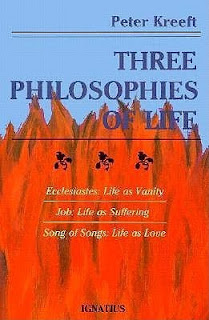 Ancient ethics always dealt with three questions. Modern ethics usually deals with only one, or at the most two. The three questions are like the three things a fleet of ships is told by its sailing orders. (The metaphor is from C. S. Lewis.) First, the ships must know how to avoid bumping into each other. This is social ethics, and modern as well as ancient ethicists deal with it. Second, they must know how to stay shipshape and avoid sinking. This is individual ethics, virtues and vices, character building, and we hear very little about this from our modern ethical philosophers. Third, and most important of all, they must know why the fleet is at sea in the first place. What is their mission, their destination? This is the question of the summum bonum, and no modern philosophers except the existentialists seem even to be interested in this, the greatest of all questions. Perhaps that is why most modern philosophy seems so weak and wimpy, so specialized and elitist, and above all so boring, to ordinary people.

I'd been wanting to read this book for years. When our podcast's season 12 opening guest chose Ecclesiastes as the book to discuss, that was all the excuse I needed!

Author Peter Kreeft considers Ecclesiastes, Job, and Song of Songs in a series of meditations. Looking at them as pieces of philosophy, he is able to show how each relates to attitudes still held today. He compares the three books thus: Life as Vanity (Ecclesiastes, where "vanity" means "a puff of air"), Life as Suffering (Job), and Life as Love (Song of Songs).

I really found it valuable to compare these books of wisdom literature which are some of the most difficult of the Old Testament – for me anyway. I am used to commentaries but Kreeft's philosophical approach felt unique as he considered what they teach us about the human experience. I especially enjoyed his take on them as a very early take similar to Dante's Divine Comedy — a journey through hell, purgatory, and heaven. And I found it inspiring as well as useful for my own life.

To understand the world of things, you need science and suspicion and the method of doubt; accept nothing until it is proven. Every idea is guilty until proven innocent. but to know people, you need the opposite method: trust, love, openness. Persons are innocent until proven guilty. You cannot hear them unless that is your attitude. Suspicion never reaches the other's heart.