Vikram Vedha — "Let me tell you a story." 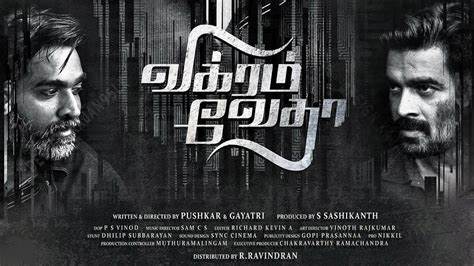 Vikram is a brave and honest police inspector who is decisive about right and wrong. Vedha is a criminal who understands the grey shades between good and evil. Vikram leads an encounter* unit formed to eliminate Vedha. In the course of the manhunt, Vedha tells Vikram three stories which change his perceptions of good and evil.

This neo-noir film is a classic story of cat-and-mouse between criminal and policeman which kept us guessing, especially when Vedha's moral questions kept throwing new light on the investigation. It's an exciting thriller that also makes us think as each time Vedha says "let me tell you a story" with a wicked twinkle in his eye. We see new light shed on our judgment of the characters as Vikram is forced to reassess himself and the situation.

The movie's framework of using stories to engage two protagonists to a meeting of minds is inspired by the Indian folktale Baital Pachisi. They are also known as internationally Vikram-Betaal and are often called the vetala tales. So we can see whence the names of the film protagonasts are derived. These are ancient Sanskrit stories which made us think of the Scheherazade stories in that a framing story encapsulates a lot of other tales.  Knowing just the basic outline of the stories gave us context adding another layer of understanding and enjoyment to the movie. We could only imagine how much fun watching this must have been for Indians knowing the Baital Pachisi.

We were really impressed with the storytelling and directing from the husband and wife team Pushkar · Gayatri. We weren't the only ones. This was a really popular film and is going to be remade in Hindi, using the same directors. The cast were all good but the main stars made the film. We'd never seen Vijay Sethupathi before but his intelligent, self assured gangster with a twinkle in his eye captured our hearts at once. It is easy to see why he is so popular that his nickname from fans is "People's Treasure." (I love the way that the Indian fans love their movie stars.) We've seen Madhavan (Vikram) in other movies but he is something of a chameleon and can be hard to pick out as he ranges from a crazy college kid in 3 Idiots to the hapless love in Tanu Weds Manu to the self assured detective Vikram.

* Encounter killings are something we have been shocked to find are an accepted feature of Indian society and often featured in films as heroic. Wikipedia explains:

Encounter killing is a term used in India, Pakistan and Sri Lanka since the late 20th century to describe extrajudicial killings by the police or the armed forces, supposedly in self-defence, when they encounter suspected gangsters or terrorists. In the 1990s and the mid-2000s, the Mumbai Police used encounter killings to attack the city's underworld, and the practice spread to other large cities.