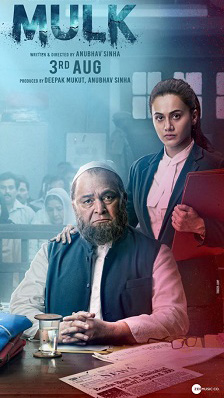 This was based on a true case where a terrorist's entire family was taken to court and accused of being a terrorist cell. We were invested on the family's side, as most American viewers would be, and as the movie intended everyone to be. It was also very interesting to see how the top terrorist persuaded the family son to his cause.

The movie did an especially good job of showing the friendly Hindu-Muslim relations between neighborhood families which then spiraled downhill after the terrorist act. And we appreciated the inside views of the horror-stricken family and how they also got different reactions to the crime from inside their own Muslim community.

The actors were all great, especially Rishi Kapoor as the family patriarch and Ashutosh Rana as the public prosecutor. Rana is well known for his "negative roles" and we could see why.

Some reviewers criticized this for a lack of subtlety but c'mon. It's a courtroom drama. That means over-the-top speeches whether in America or India. Even the venerable Twelve Angry Men doesn't escape that. Overall, a good legal movie with a message that works today in America in a lot of ways.