"How shall we live?" — Genesis: The Book of Beginnings by Rabbi Jonathan Sacks 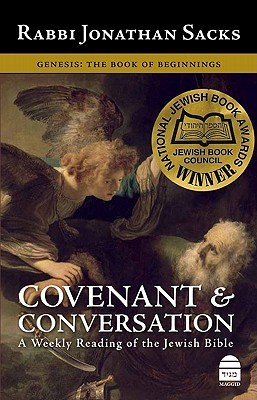 Each week, synagogues around the world read a section from the Torah (the five books of Moses). The  cycle begins with Genesis and ends with the last verses of Deuteronomy 12 months later. The Covenant & Conversation series has essays commenting on each of the weekly readings.

These essays are by Rabbi Jonathan Sacks who was the Chief Rabbi of the U.K. for some 20 years. I'd read his editorials occasionally in the Wall Street Journal and always found them insightful, inspirational, and down to earth. When I discovered he'd done this series I began at the beginning with Genesis. What I found was a work of genius.

These essays have the same easy style I remembered while giving indepth, brilliant, compassionate commentary that often surprised me and sometimes changed my whole perspective on a Biblical person or their actions. Sacks is good at comparing ancient and modern worldviews. This not only clarifies Biblical context but often shows just how different our current ideas are. These are stories about people and Sacks never forgets that. He looks at what Torah is showing us that is the same not only in those ancient times, but in our own lives. After all, the word of God is eternal, applying to all time and all people.

I learned new ways of looking deeper at familiar stories such as when Isaac is tricked into giving his blessing to Jacob instead of Esau. I found deeper sympathy and new insights into lesser characters. Who knew she was not only crafty but also tactful? Or that Judah's encounter with Tamar led to a life-changing realization that helped him pass Joseph's test when the brothers all go to Egypt seeking grain? I already loved Tamar but now I have more sympathy and admiration for Judah's growth.

There is much here that resonates with the Catholic soul, simply because the Jews are our elder brothers in the faith. However, a Christian reading these essays will be sharply reminded that there is a Jewish way of thinking about the first five books of the Bible, and, indeed, about God and worship, which is particular to the Jewish people. That is a real cultural wake up call and one that I found sometimes jerking me to the realization that this is different. The thinking, the response to God and His call, the way of dealing with other people — it can be very different, while still being anchored in our common knowledge of the one, personal God.

A quick example is that I was surprised by the Jewish custom of reading Torah every year. Just like us! No, I realized. We're just like them. The first Christians were Jewish and I am well used to finding parts of Catholic liturgy that reflect they were patterned after those Christians' original faith. That was an easy mental adjustment, one that left me happy at another proof of our family ties.

Here are a few of the themes emphasized as being core parts of Judaism, which surprised me.

These might seem like no brainers, reading this list. It's not that Catholicism doesn't have these elements but they don't define us the way that Sacks made clear they define the Jewish people. I found myself understanding a little better their pride at their indestructibility, the ancientness of their faith, and their role as God's chosen people.

There is a fair amount of midrash considered throughout. Midrash is textual study and interpretation of scripture that uses questions, examines what is left unsaid, and fills in with their own stories to form a running commentary. I'm not crazy about midrash as it can range far afield sometimes. I'm not Jewish so perhaps that is understandable. Sacks sometimes includes midrash in order to keep following the logical train of thought and sometimes so that he can introduce a different interpretation.

Quibbles about midrash aside, this is a work of genius. Highly recommended.

Note: I'm going to be sharing some excerpts from the book.