A screwball comedy that should be better known. 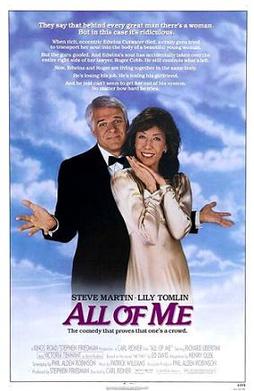 Rich, eccentric Edwina Cutwater  (Lily Tomlin) plans to transport her soul into the body of a beautiful young woman. But it goes wrong. And Edwina's soul has accidentally taken over the entire right side of her lawyer, Roger Cobb (Steve Martin). He still controls what's left. Now, Edwina and Roger are living together in the same body. He's losing his job. He's losing his girlfriend. And he just can't seem to get her out of his system. No matter how hard he tries.

"All of Me" shares with a lot of great screwball comedies a very simple approach: Use absolute logic in dealing with the absurd. Begin with a nutty situation, establish the rules, and follow them. The laughs happen when ordinary human nature comes into conflict with ridiculous developments.

I'd forgotten just how funny this movie is. We saw this in theaters when it came out and I remembered the big plot points. However, I hadn't seen it for many years so that details of the physical comedy, timing, and the witty screenplay made me laugh out loud. In fact, we were all laughing out loud, which was a lovely way to begin the weekend.

This celebrates not only Steve Martin's acting but merges that with his gift for physical comedy in a way that really works. This really also benefits from the sharp comedic timing of Martin, Tomlin and director Carl Reiner.

The "life after death" theme and humor could put this into loosely into the same category as Ghostbusters if you want a light, non-scary Halloween movie. Though, of course, it is more about living than dying.

Nancy:
Dale, get out of the hot tub. We're stealing a news van.

Dale:
It's the perfect crime. How would they cover it?

Remember: Nobody is perfect. Whatever you lack in talent and ability, you will more than make up for in well-timed excuses.