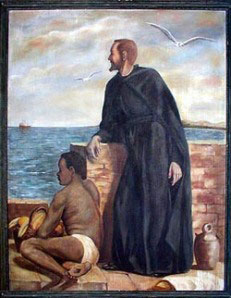 Peter Claver was born of a distinguished family in Catalonia, Spain. He became a Jesuit in 1604, and left for Colombia in 1610, dedicating himself to the service of black slaves. For thirty-three years he ministered to slaves, caring for the sick and dying, and instructing the slaves through catechists. Through his efforts three hundred thousand souls entered the Church.

I have loved Peter Claver from the first time I read about him. The brief description above doesn't do justice to his heroic efforts: going to the slave ships with water, medicine, food, and clothing; working and living among slaves on plantations in order to minister to them; ministering to all levels of society in Cartagena from the wealthy to Muslims to criminals.

Take a few minutes and read more about this saint who shows the extraordinary difference that ordinary people can make when they follow God's promptings.

Here is part of a letter that St. Peter Claver wrote describing his ministries, as quoted in the Liturgy of the Hours.

Yesterday, May 30, 1627, on the feast of the Most Holy Trinity, numerous blacks, brought from the rivers of Africa, disembarked from a large ship. Carrying two baskets of oranges, lemons, sweet biscuits, and I know not what else, we hurried toward them. When we approached their quarters, we thought we were entering another Guinea. We had to force our way through the crowd until we reached the sick. Large numbers of the sick were lying on the wet ground or rather in puddles of mud. To prevent excessive dampness, someone had thought of building up a mound with a mixture of tiles and broken pieces of bricks. This, then, was their couch, a very uncomfortable one not only for that reason, but especially because they were naked, without any clothing to protect them.

We laid aside our cloaks, therefore, and brought from a warehouse whatever was handy to build a platform. In that way we covered a space to which we at last transferred the sick, by forcing a passage through bands of slaves. Then we divided the sick into two groups: one group my companion approached with an interpreter, while I addressed the other group. There were two blacks, nearer death than life, already cold, whose pulse could scarcely be detected. With the help of a tile we pulled some live coals together and placed them in the middle near the dying men. Into this fire we tossed aromatics. Of these we had two wallets full, and we used them all up on this occasion. Then, using our own cloaks, for they had nothing of this sort, and to ask the owners for others would have been a waste of words, we provided for them a smoke treatment, by which they seemed to recover their warmth and the breath of life. The joy in their eyes as they looked at us was something to see.

This was how we spoke to them, not with words but with our hands and our actions. And in fact, convinced as they were that they had been brought here to be eaten, any other language would have proved utterly useless. Then we sat, or rather knelt, beside them and bathed their faces and bodies with wine. We made every effort to encourage them with friendly gestures and displayed in their presence the emotions which somehow naturally tend to hearten the sick.

After this we began an elementary instruction about baptism, that is, the wonderful effects of the sacrament on body and soul. When by their answers to our questions they showed they had sufficiently understood this, we went on to a more extensive instruction, namely, about the one God, who rewards and punishes each one according to his merit, and the rest. We asked them to make an act of contrition and to manifest their detestation of their sins. Finally, when they appeared sufficiently prepared, we declared to them the mysteries of the Trinity, the Incarnation and the Passion. Showing them Christ fastened to the cross, as he is depicted on the baptismal font on which streams of blood flow down from his wounds, we led them in reciting an act of contrition in their own language.

O God, who made Saint Peter Claver a slave of slaves
and strenghtened him with wonderful charity and patience
as he came to their help,
grant, through his intercession,
that, seeking the things of Jesus Christ,
we may love our neighbor in deeds and in truth.
Through our Lord Jesus Christ, your Son,
who lives and reigns with you in the unity of the Holy Spirit,
one God, for ever and ever. Amen.