This feast would normally fall on Sept. 20 but since that is a Sunday this year, I'm posting it a day early — I just love the example set by these holy lay people! 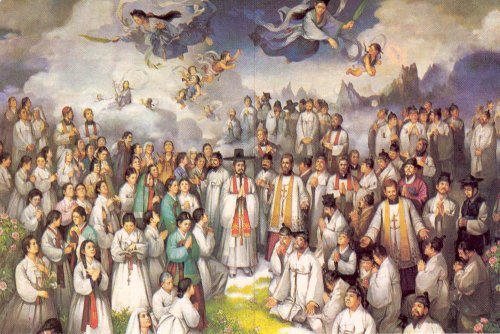 The Korean Church is unique because it was founded entirely by lay people. This fledgling Church, so young and yet so strong in faith, withstood wave after wave of fierce persecution. Thus, in less than a century, it could boast of 10,000 martyrs. The death of these martyrs became the leaven of the Church and led to today's splendid flowering of the Church in Korea. Even today their undying spirit sustains the Christians in the Church of silence in the north of this tragically divided land.


The first native Korean priest, Andrew Kim Taegon was the son of Christian converts. Following his baptism at the age of 15, Andrew traveled 1,300 miles to the seminary in Macao, China. After six years, he managed to return to his country through Manchuria. That same year he crossed the Yellow Sea to Shanghai and was ordained a priest. Back home again, he was assigned to arrange for more missionaries to enter by a water route that would elude the border patrol. He was arrested, tortured, and finally beheaded at the Han River near Seoul, the capital.

Andrew’s father Ignatius Kim, was martyred during the persecution of 1839, and was beatified in 1925. Paul Chong Hasang, a lay apostle and married man, also died in 1839 at age 45.

Among the other martyrs in 1839 was Columba Kim, an unmarried woman of 26. She was put in prison, pierced with hot tools and seared with burning coals. She and her sister Agnes were disrobed and kept for two days in a cell with condemned criminals, but were not molested. After Columba complained about the indignity, no more women were subjected to it. The two were beheaded. Peter Ryou, a boy of 13, had his flesh so badly torn that he could pull off pieces and throw them at the judges. He was killed by strangulation. Protase Chong, a 41-year-old nobleman, apostatized under torture and was freed. Later he came back, confessed his faith and was tortured to death.

I found the above excerpt at Catholic Culture which has more info including activities.

There is also a whole page on the Korean Martyrs at Wikipedia, which I found fascinating.
By Julie D. at September 19, 2020