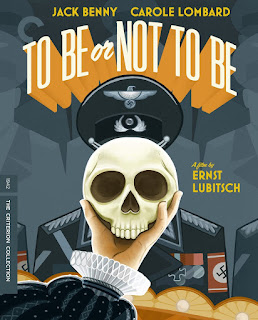 During the Nazi occupation of Poland, an acting troupe becomes embroiled in efforts to track down a German spy.

Jack Benny and Carole Lombard shine in this satire directed by the great Ernst Lubitsch, a master of screwball comedy. It is a unique movie in the way it alternates comedy with really poignant moments — the poignancy would have been more so in 1942 when the Nazis were in Poland. Watching this made me especially appreciate Lombard's acting skill. It was her last film and released a month after she died.

This movie was highly controversial when it was released in 1942. That's hard to image watching it today but when the movie was released there'd been nothing but bad news from Europe, the U.S. hadn't entered the war yet, and nothing seemed to stop Hitler in his goal of world domination. This movie seemed in very bad taste.

But Ernst Lubitsch had an important message beneath the screwball humor — Nazis were not unbeatable superhumans, but simply deluded and incompetent human beings who chose to follow a ridiculous leader like Hitler. And they could be beaten — as a troupe of Polish actors shows us. And never more entertainingly so than in To Be or Not to Be.