A Movie You Might Have Missed #14: How to Murder Your Wife 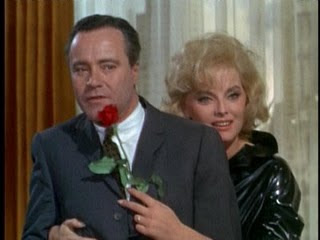 Tom and I both remembered this movie from our childhoods and it was even funnier than I remembered. Jack Lemmon is a cartoonist and the ultimate New York playboy who, in a drunken interlude at a bachelor's party, marries the girl who pops out of the cake. She disappears after he has fantasized about killing her in his comic strip and he soon finds himself on trial for murder.

The movie not only satirizes the proverbial "battle of the sexes" a la 1965 but the stereotypes of many other things as well. It is, literally, laugh out loud funny. A special pleasure is Terry Thomas as Lemmon's valet who is entirely too bloodthirsty for comfort at the idea of murdering Lemmon's wife.

It is seriously politically incorrect so you really have to keep the satire in mind, depending on your mindset and ability to remember the common context of the 1960s.
By Julie D. at June 30, 2020