Part 5 - The Wedding at Cana and The Passion of Christ 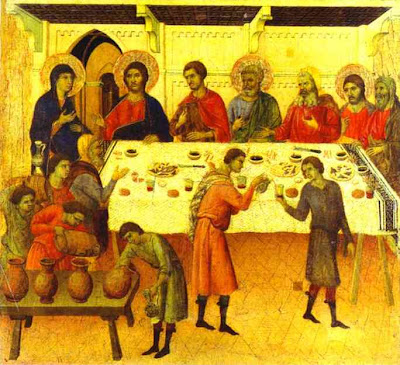 
The final part of Fulton Sheen's reflections on the wedding at Cana and Christ's Passion, death and resurrection.


The Cross is everywhere. When a man stretches out his arms in relaxation, he unconsciously forms the image of the reason for the Son of Man's coming. So too at Cana, the shadow of the Cross was thrown across a "woman," and the first stroke of the "Hour" was sounded like a bell of execution. In all the other incidents of His life, the Cross came first, then the joy. But at Cana, it was the joy of the nuptials that came first--the nuptials of the Bridegroom and the Bride of redeemed humanity; only after that are we reminded that the Cross is the condition of that ecstasy.

Thus He did at a marriage feast what He would not do in a desert; He worked in the full gaze of men what He had refused to do before Satan. Satan asked Him to turn stones into bread in order that He might become an economic Messiah; His mother asked Him to change water into wine that He might become a Savior. Satan tempted Him from death; Mary "tempted" Him to death and Resurrection. Satan tried to lead Him from the Cross; Mary sent Him toward it. Later on, He would take hold of the bread that Satan had said men needed, and tee wine that His mother had said the wedding guests needed, and He would change them both into the memorial of His Passion and His death. Then He would ask that men renew that memorial, even "unto the consummation of the world." The antiphon of His life continues to ring: Everyone else came into the world to live; He came into the world to die.