Part 4 - The Wedding at Cana and The Passion of Christ 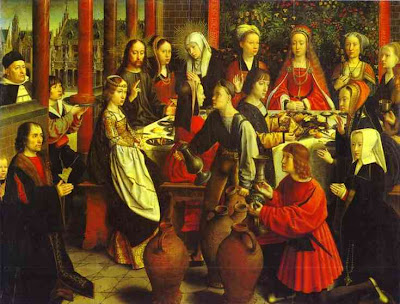 
More of Fulton Sheen's observations about the wedding at Cana and Christ's Passion, death and resurrection.


The six water pots were filled, making about one hundred and twenty gallons, and in the beautiful language of Richard Crashaw, "the conscious water saw its God and blushed." The first miracle was something like creation itself; it was done by the power of "the Word." The wine He created was so good that the bridegroom was reproached by the steward with the words:


Everyone serves the best wine first, and waits until the guests have drunk freely before serving the poorer sort; but you have kept the best wine till now. John 2:10

Truly the best wine was kept. Up until then in the unfolding of revelation, the poor wine had been the prophets, judges, and kings, Abraham, Isaac, Jacob, Moses, Josue -- all were like the water awaiting the miracle of the Expected of the Nations. The world generally gives its best pleasures first; afterward come the dregs and the bitterness. But Christ reversed the order and gave us the feast after the fast, the Resurrection after the Crucifixion, the joy of Easter Sunday after the sorrow of Good Friday.


This deed at Cana-in-Galilee is the first of the signs by which Jesus revealed his glory and led his disciples to believe in him. John 2:11