I've seen it reported that people are reading and watching movies about contagions.

This mystifies me. Real life isn't enough for them? As always, when faced with stressful circumstances in life I turn to light, entertaining books to get away from it all.

This book is one I'd forgotten I had until browsing through my Kindle library. It's just what the doctor ordered! 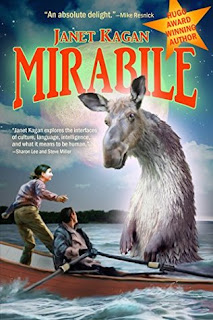 That year the Ribeiro's daffodils seeded early and they seeded cockroaches. Now, ecologically speaking, even a cockroach has its place -- but these suckers bit. That didn't sound Earth-authentic to me. Not that I care, mind you, all I ask is useful. I wasn't betting on that either.

A light, enjoyable collection of connected short stories told in a pleasing voice. These strike me as perfect juvenile stories though I can see how they'd be fun if encountered in sf magazines. There is little character development, what you see is what you get. Not that there's anything wrong with that for entertaining reading.

They are largely problem solving tales, wrapped in the intriguing environment of human colonists on Mirabile. Scientists who packed the colony ships with embryos also planned for emergency redundancy with some gene twisting so that each species contains the genes for other species. Which is super until your computer has a glitch that loses how to turn those genes off or on. When the Earth species react to the alien environment they reproduce with different species altogether, or sometimes with unexpected results of genes that mixed to produce monsters. My favorite — the Kangaroo Rex.

The fun is in watching Jason, the planet's genetic/environmental problem solver, evaluate and handle the various mutations along the way.
By Julie D. at March 20, 2020

Wash:
Can we start with the part where Jayne gets beat up by a 90 pound girl? Because that's never getting old.

Satan will take the form of Excel spreadsheet cell G-14 this week and refuse to assume the proper formatting.