Solemnity of Christ the King

It's the last Sunday of the Liturgical Year — so are we ready for Christ the King?

Here's a repost which I always enjoy reading every year. I hope you do too! 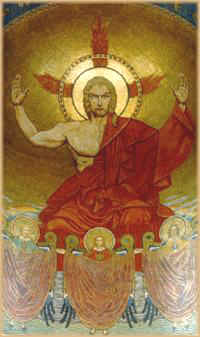 As the visions during the night continued,
I saw One like a son of man coming, on the clouds of heaven;
When he reached the Ancient One and was presented before him,
He received dominion, glory, and kingship;
nations and peoples of every language serve him.
His dominion is an everlasting dominion that shall not be taken away,
his kingship shall not be destroyed.

Pope Pius XI instituted The Feast of Christ the King in 1925 for the universal church in his encyclical Quas Primas. He connected the denial of Christ as king to the rise of secularism. At the time of Quas Primas, secularism was rising, and many Christians (including Catholics) began to doubt Christ's authority and existence, as well as the Church's power to continue Christ's authority. Pius XI, and the rest of the Christian world, witnessed the rise of dictatorships in Europe, and saw Catholics being taken in by these earthly leaders. Just as the Feast of Corpus Christi was instituted when devotion to the Eucharist was at a low point, the Feast of Christ the King was instituted during a time when respect for Christ and the Church was waning, when the feast was most needed. In fact, it is still needed today, as these problems have not vanished, but instead have worsened.

I was surprised when I looked through my archives and didn't see any comments about the Solemnity of Christ the King. Perhaps that is because I haven't really appreciated it much until over the past year. That is partly because one can only absorb so much at a time and although I converted in 2000, that is not really such a long time ago.

It also signals an internal conversion, which we all undergo in one way or another for our entire lives. I recently caught myself saying, "His majesty" and meaning God. That made me happy for two reasons, the first of which was because I never understood how St. Teresa of Avila could be somewhat sassy to God and still call him "His majesty" ... and now I did understand that much more.

The second because I feel much more that I am a daughter of the king. That would anyone happy, wouldn't it? To discover that they come from royalty, albeit a royalty that reigns in order to render humble service. Certainly I feel I have a bit better understanding of my place in the scheme of things overall and my gradually deepening relationship with my king who rules through love.

The above image of Christ the King comes from the Basilica of the National Shrine of the Immaculate Conception in Washington, DC. I was captivated when I discovered it. The strength and confidence of this image of Christ fills me with joy. For a discussion of the symbolism included, read Msgr. Charles Pope's piece Awesome or Awful? Here's a sample:


... let’s look a little closer at Christ’s face (at Left). Look closely at his eyes. Notice that the one on the right (from our perspective) is more rounded and serene than the one on the left that is narrower and piercing. Notice also that the right eyebrow is more arched and peaceful and the one on the left angled and downward in a severe look. Now take your hand and cover the left side of the face and see that he is more serene and then cover the right side of the face and see that he is severe. This is very common in Eastern Iconography which likes to present both the Justice and Mercy of God on the face of Christ. It is subtle but it is meant to be otherwise we’d have a weird looking face. On the Day of Judgement there will be mercy seen by those who have shown mercy and severe justice to those who have been severe (Mat 5:7; Mat 7:2; James 2:13) for Justice and mercy are alike with him (cf Sirach 5:7). Looking into his eyes I am reminded of the stunning text from Hebrews which says of Christ: No creature is concealed from him, but everything is naked and exposed to the eyes of him to whom we must render an account. (Heb 4:13)

This solemnity is also the last Sunday of the liturgical year. Next Sunday begins Advent and the new liturgical year for the Church. That means gospel readings on Sunday will generally be from the Gospel of Mark.
By Julie D. at November 21, 2021