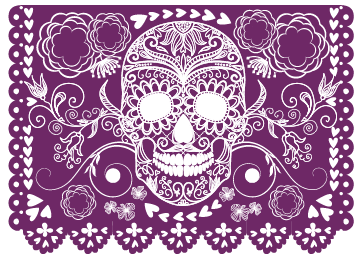 The best known All Souls’ Day observances in the United States come from Mexican immigrants. Mexico has a vibrant celebration, cleaning graves and building altars on them, bringing favorite foods or trinkets for the deceased, sugar skulls, and marigolds, toys for children, alcohol for adults. Families will spend time praying and reminiscing.

These are often carried out from Halloween through All Souls' Day.

Ray Bradbury had a real love for the purpose of Day of the Dead in Mexico. He wrote about it most notably in his children’s book The Halloween Tree.

For now they knew why the town was empty.

Because the graveyard was full.

By every grave was a woman kneeling to place gardenias or azaleas or marigolds in a frame upon the stone.

By every grave knelt a daughter who was lighting a new candle or lighting a candle that had just blown out.

By every grave was a quiet boy with bright brown eyes, and in one hand a small papier-mâché funeral parade glued to a shingle and in the other a papier-mâché skeleton head which rattled with rice or nuts inside. ...

“Mexican Halloweens are better than ours!”

For on every grave were plates of cookies shaped like funeral priests or skeletons or ghosts, waiting to be nibbled by—living people? or by ghosts that might come along toward dawn, hungry and forlorn? No one knew. No one said. ...

And each boy beside the graveyard, next to his sister and mother, put down the miniature funeral on the grave. And they could see the tiny candy person inside the tiny wooden coffin placed before a tiny altat with tiny candles. ... And on the altar was a photograph of the person in the coffin, a real person once; remembered now.

“What?” said Ralph at his elbow.

“Up in Illinois, we’ve forgotten what it’s all about. I mean the dead, up in our town, tonight, heck, they’re forgotten. Nobody remembers. Nobody cares. Nobody goes to sit and talk to them. Boy, that’s lonely. That’s really sad. But here—why, shucks. It’s both happy and sad. It’s all firecrackers and skeleton toys down here in the plaza and up in that graveyard now are all the Mexican dead folks with the families visiting and flowers and candles and singing and candy. I mean it’s almost like Thanksgiving, huh? And everyone set down to dinner, but only half the people able to eat, but that’s no mind, they’re there. It’s like holding hands at a séance with your friends, but some of the friends gone. ...”

Except the Catholic Church all over the world, of course. We remember and we pray.

For more on the Day of the Dead check Wikipedia.

The Offering (1913) exemplifies Mexican modernism with its allegorical allusion to life’s journey. It displays a punt boat in a canal filled with zempasúchitl flowers (a marigold that is traditionally associated with death). Featured are a baby, a youthful man, and an elderly man offering the flowers for the dead. This is a reference to ofrenda, a tradition deeply connected to Mexico's Dia de los Muertos, a celebration of ancestry that is said to connect the living to the dead. Each character is represents a different stage of life, but they are all following the same end destination and respecting their course.

Email ThisBlogThis!Share to TwitterShare to FacebookShare to Pinterest
Labels: All Souls