A Great Beginning to a Catholic History Series: The Church and the Roman Empire by Mike Aquilina 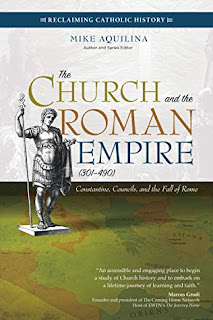 The Church and the Roman Empire (301–490)
Constantine, Councils, and the Fall of Rome
by Mike Aquilina


This brand new history series is just what I've been wanting — truthful Catholic history that's easy to read and that busts some of the ubiquitous myths about Catholicism. Author Mike Aquilina keeps the history easy to understand while adding depth to the bits that I already knew ... or thought I knew.

Occasional "Up Close and Personal" boxes showcase different personalities or aspects of Christianity from that time, such as looking at the Catholic bishop before Patrick or listing five who chucked everything for a life of solitude. "You Be the Judge" boxes examine common questions and set the record straight on topics like "Didn't Christianity harm the status of women?" or "Do Christians exaggerate the persecutions?"

One of Aquilina's strengths is the way that he makes the scenes come alive. Here's a bit from the Council of Nicaea.


It was a grand spectacle to see so many bishops at once, and the general public filled the spectators' areas to listen to some of the preliminary debates. Even pagan philosophers joined the fun—some out of genuine curiosity, others to make fun of the Christians. People from town came just to see the parade of bishops of all nations. Even Scythia, exotic land of barbarian cowboys, and Persia, traditional enemy of Rome for generations, were represented. ...

And of course everyone wanted a glimpse of the two men who had started the whole uproar, Arius and Alexander. Alexander, a frail old man who needed help to get around, was a bit of a disappointment, although his young archdeacon and assistant Athanasius looked like a man to watch. But Arius was a rock star. he was tall, a good speaker, and a very thoughtful-looking man. Fangirls followed him wherever he went. He must have something to say.

It really makes me feel the excitement in the air. Very much not the way I usually think of the Council of Nicaea!

Highly recommended. I can't wait for the other books in the series to be published.
By Julie D. at September 26, 2019