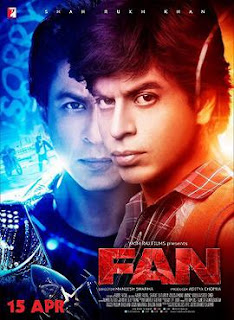 Gaurav develops an obsession with a movie star who looks just like him. He goes to Mumbai to meet his idol, but he refuses to grant him five minutes of his time. Gaurav is enraged and plots to destroy his hero.

They had me at Shah Rukh Khan playing his own stalker. Normally I wouldn't care about this sort of movie but was curious to see how Khan carried off the dual roles. I'm happy to say this is a solid thriller and a real star vehicle for King Khan who proves he can really act. I also enjoyed the fact that this had some very tense moments but without indulging in the extremes that Hollywood would have included.

Rating — Bollywood Medium (mostly straight forward but with some concepts it is helpful to have come across before. Such as, in this one, knowing that Bollywood fandom is taken to ridiculous levels such as huge crowds waiting outside a star's house just to wave to him on his birthday ... or people having small shrines to their favorite stars.)

ALSO
Hannah and Rose discuss it at An American's Guide to Bollywood.
By Julie D. at January 08, 2019