The Fellowship: The Literary Lives of the Inklings by Philip Zaleski and Carol Zaleski 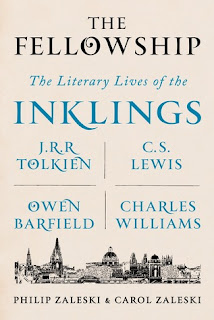 C.S. Lewis is the twentieth century’s most widely read Christian writer and J.R.R. Tolkien its most beloved mythmaker. For three decades, they and their closest associates formed a literary club known as the Inklings, which met weekly in Lewis’s Oxford rooms and in nearby pubs. They discussed literature, religion, and ideas; read aloud from works in progress; took philosophical rambles in woods and fields; gave one another companionship and criticism; and, in the process, rewrote the cultural history of modern times.

Romantics who scorned rebellion, fantasists who prized reality, wartime writers who believed in hope, Christians with cosmic reach, the Inklings sought to revitalize literature and faith in the twentieth century's darkest years--and did so in dazzling style.

I've read enough about Tolkien, Lewis, and the Inklings that I resisted this behemoth of a book until now. What hooked me was that the authors delve into both their faith and their literary works more deeply than the other things I've read. I read slowly, just picking it up here and there, and it was oh so satisfying.

One of the things I especially liked was that it humanized and made likable some of the characters who came off as one dimensional in other biographies. For example, Lewis's father always seemed an unfeeling fellow who continually made Lewis miserable. In this book we see excerpts of letters between the father and Warnie, Lewis's much loved brother, where both are worried about some activity of Lewis's. So we get another angle. The same goes for Edith Tolkien who I've simply seen written about as miserable and unfulfilled as a person. That angle is not ignored, but we also see the Tolkien couple's devotion to each other and the good things she got from her marriage to J.R.R. Lewis's wife Joy and their relationship gets similarly balanced treatment.

I'd say that this is the only book you need if you are interested in biographies of Tolkien and Lewis, or simply interested in the Inklings. It is superb and superior to any other books I've read on these subjects.
By Julie D. at October 03, 2018