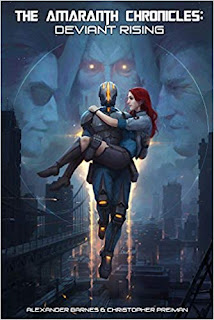 The Helix was created to revolutionize the way we communicate. But even the purest of intentions can spawn terrible evil.

This wasn’t what Lithia had in mind when she decided to run away from home. Her ship was not meant to carry a fugitive wanted in two galaxies, or the stowaways running from a war that wasn’t hers. She just wanted to live a quiet, peaceful life alongside her brother. But now she knows too much about The Helix, the secret hidden deep within it, and what it would mean for all humankind if she walked away.

Deviant Rising is a solid space opera with big ideas, likable characters, and plenty of action.

The Helix is a universal communications system which everyone in the future is as addicted to as we are addicted to the internet. And what's not to like? It connects with your brain, feeding all the info you need on demand. At least that's how the people of the United Planets of Earth (UPE) feel about it. Out on the Frontier, well, that's a different story. They're pretty independent and not crazy about the UPE's edict that they hook up to the Helix.

And so a rebellion begins.

There's more to it than that, of course. Star Wars style, this tale is told through the eyes of several people who are unconnected to any big doings of government, politics, or power. Or so they think. I mentioned Star Wars and we do meet some familiar character types with motivations that are similar. But the feel I had more was of Firefly, with stubborn people on the fringes of society doing what they must to scratch along and, if necessary, make things right.

I really enjoyed this future San Francisco with the rich people living high up in full sunlight and the poor stuck at the bottom in the Undercity where no light ever penetrates. What a novel idea for establishing privilege and caste. I also enjoyed the Archer's Agony setting, with the story of how the dead ships docking just became part of the structure. That sounds just about right for a frontier culture without lots of resources.

There's a big cast of characters, including my favorites:  a cyborg-assassin with a conscience (we love to love those bad boys, right?) and a naturally gifted engineer who's never happier than when he gets his hands on an engine to fix (like Kaylee from Firefly). They are part of three different plots that come together (natch) into one fast paced story.

In a lot of ways it made me think of my favorite Robert Heinlein stories, the "juveniles" which didn't dumb it down but gave us plenty of action to go with the ideas.

A lot of fun and I hope there is a sequel though this is a stand alone novel.
By Julie D. at September 20, 2018