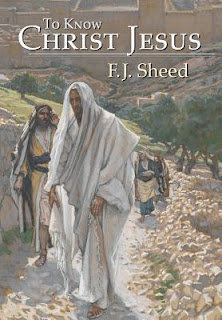 This is a synthesis of the Gospel stories, looking at the life of our Lord as a whole in the context of his times and environment as well as of religion. I'm just beginning to reread it but had forgotten, since I last read it 8 years ago, that Sheed's approach is fresh and modern seeming which is extraordinary since it was first published in 1962.

He looks at characters I never thought about, such as Theophilus, for whom Luke wrote his gospel and Acts of the Apostles. After musing about whether Theophilus was a Christian and what he might have been taught before sitting down to read Luke's work, Sheed puts us in touch with how the gospel would have struck Theophilus and been generally responded to in that age.


The Greek word "akribos"—it means accurately, carefully—could hardly have prepared him for what follows immediately—the angel Gabriel bringing to the priest Zachary the announcement that his elderly wife would bear his elderly self a son, the angel going on to tell a virgin in Nazareth that she would conceive. One imagines Theophilus incredulously muttering "akribos" to himself—all the more if he had known Luke as a pagan in his medical student days at Tarsus.

Notice too how Sheed reminds us of Luke's own background and the testimony of having such a man write about Christ.

He also makes me laugh with the wry way he brings St. Paul down to earth and has sympathy for the man in the pew:


...if only we had notes of that long sermon preached by Paul at Troas, during which Eutychus, surely the patron saint of the Sunday laity, fell asleep!

All of these little touches make those ancient times and people live and breathe for us ... as well as bringing us, we hope, closer to knowing Christ Jesus more personally.
By Julie D. at August 23, 2018