I was going to stop talking about Bollywood movies unless I came across something that I thought would be good entryway films.

And then this weekend I came across two such movies. These are both by director/screenwriter Vijay Krishna Acharya. That is completely coincidental but it did wind up leaving me with my first Indian director to keep an eye out for. Both these movies were on the top 100 Bollywood movies list that Rose is working from for guidance in exploration. Dhoom 3 has the added advantage of starring Aamir Khan who is a favorite of ours.

At any rate, both these combine recognizable Western styles with Bollywood filmmaking. It makes for extremely entertaining viewing. 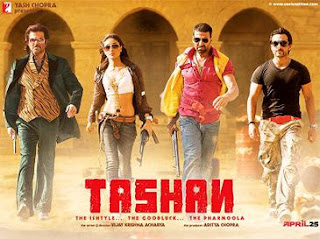 Jeetendra Kumar Makwana is employed full-time at a Call Center and works part-time teaching English. He is recruited by an attractive young woman, Pooja, to teach her Hinglish-speaking boss, Bhaiyaji, English. Jeetendra agrees to do so, falls in love with Pooja, and joins forces with her to steal a bag containing 25 Crore Rupees in cash. He will soon find out that Bhaiyaji is a hoodlum and extortionist known to the Police as Lakhan Singh. And that spells big trouble for everyone.

Tashan means style and this picture has it in spades. It is ridiculously fun Tarantino style action (without the gore because it is Bollywood not Hollywood) with big song and dance numbers (Bollywood not Hollywood). Indian reviews wavered on giving approval but American reviews all raved, as did we. This director obviously has a way with movies that appeals to American sensibilities.

My favorite character was the hit man sent to retrieve the two thieves. The "Jackie Chan of India" he played a character who turned into a lovable oaf (much like Jayne on Firefly) and won my heart. My favorite number was the Hollywood film one, which got so many tiny Hollywood things wrong (in a charmingly Indian way) but still worked most amusingly. It also gave me a new Khan to keep an eye out for — Saif Ali Khan — whose charming twinkle reminded us all strongly of Bradley Cooper.

This was a milestone for us in several ways because we got an in-joke about Indian movies, recognized posters for other movies on city streets, and recognized two of the stars from other movies we'd seen. Baby steps. But fun.

Rating — Introduction to Bollywood (come on in, the water's fine!)

Hannah and Rose talk about Tashan at An American's Guide to Bollywood. 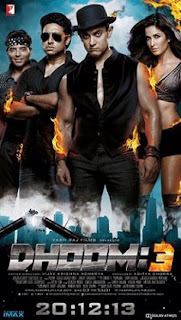 To avenge his father’s death, a circus entertainer trained in magic and acrobatics turns thief to take down a corrupt bank in Chicago. Two cops from Mumbai are assigned to the case.

Another ridiculously entertaining film from Vijay Krishna Acharya, starring Aamir Khan who carries the film on his broad, capable shoulders. It is part of the Dhoom buddy-cop franchise only in a minor way, with Jai and Ali's part being a subplot rather than the main action. And that works. In case we we were wondering who the movie is about, three of the four musical numbers are Aamir's, while the fourth is the female lead's audition for the Great Indian Circus — danced for Aamir. Aamir is the film's ostensible villain but by the time the film ends, we were wondering why policeman Jai gives a spech about the evil bank. (I guess that told us who the real villain is.) Anyway Aamir Khan's character is what this movie is about and Our household approved all the way.

This movie was set in Chicago which made us even more interested to see it and, as with Tashan, there were some endearing misunderstandings of America. My favorites were a newsstand which clearly looked Indian and the fact that the flashbacks were costumed as if they were from the 1920s instead of the 1990s. We could only figure that the filmmakers wanted to be sure we got a sense of "long ago" and couldn't find enough obvious differences between the clothing of 2013 and that of 20 years before. Regardless, it was extremely entertaining and those little missteps only added to the charm for us.