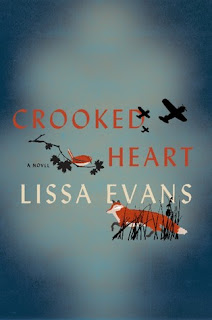 When Noel Bostock—aged ten, no family—is evacuated from London to escape the Nazi bombardment, he lands in a suburb northwest of the city with Vee—a thirty-six-year old widow drowning in debts and dependents. Always desperate for money, she’s unscrupulous about how she gets it.

Wise beyond his years and raised with a disdain for authority, Noel has little in common with the impulsive Vee, who hurtles from one self-made crisis to the next. The war’s provided unprecedented opportunities for making money, but what Vee needs—and what she’s never had—is a cool head and the ability to make a plan.

On her own, she’s a disaster. With Noel, she’s a team.

Together, they cook up a scheme. But there are plenty of other people making money out of the war—and some of them are dangerous. ...

I really enjoyed this book, having come across it after watching Their Finest which was based on a book also written by Lissa Evans. The teaming of Noel and Vee has been compared by more than one reviewer as having a Paper Moon vibe and that's fair.

I really enjoyed the way the author could set a sense of place and time, seemingly effortlessly. It was a different take on wartime England during the Blitz and yet absolutely recognizable.

I was thoroughly invested in Noel's and Vee's separate dilemmas and enjoyed the way the plot set me up for various predictable events and then took completely unexpected turns. It has serious issues but they're handled with a light enough hand that I never felt dragged down. In that way it reminded me of Major Pettigrew's Last Stand.