Heroes & Heretics of the Reformation by Phillip Campbell 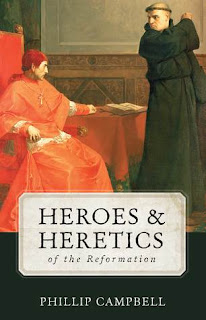 With the 500th anniversary of the Protestant Reformation last year we naturally have seen many books on the subject. I'll be honest, I'm not that interested in the reformation. I was offered a few review copies of books by Protestants who espoused ecumenism but whose samples showed their even-handedness came from embracing Catholics who agreed with them. And you just can't be Catholic and fully agree with the Protestant point of view. There's always that pesky topic of the Eucharist getting in the way for one thing.

So my interest was piqued by this book which says in the introduction that, although every effort is made for historical objectivity, it is written from a Catholic viewpoint and presumes the claims of the Catholic Church are true. I was further interested when reading an Amazon review saying, in part:


Frankly, I was surprised that I enjoyed this book so much. Its publisher, TAN books, is a highly-conservative Catholic publishing company, and I had feared -- especially in light of the title -- a biased, one-sided defense of Rome's handling of the Reformation. Instead, I found a well-written, well-balanced account of the forces that led to the Reformation, the major players in the drama, their beliefs, and the Counter-reformation that followed.

What I found was a well written book that somehow managed to be so interesting I couldn't put it down. That is high praise indeed for a book about a topic I didn't care about in the first place.

This epic, complex ideological struggle is examined first by following the progress of the Protestants who fueled the Reformation (Luther, Calvin, Knox, etc.). The last third of the book looks at major Catholic figures of the Counter-Reformation. Philip Campbell is skilled at untangling the threads so that we can see each person's background, motivations, influence and the historical backdrop for the entire situation.

One of the things that I really liked was the afore mentioned even-handedness. It was often apparent when telling about someone's major objection to Catholicism. Philip Campbell would then clarify what the Catholic teaching was and put the person's objection into context. Perhaps they'd misunderstood the teaching or they'd come across a grievous abuse or any of a number of other possibilities. He doesn't use that moment to judge the person. The history is past. He just uses it to help modern readers gain further context.

The book ends by connecting the Reformation with our world now. Campbell answers a typically modern question, "Why fight over religion?" by examining various aspects of understanding what faith means today and how the 16th century struggle still has relevance. He also considers where subsequent years have taken the Protestant-Catholic relationship.

I've been bending the ear of everyone who would listen to tell them how wonderful this book is. Now it's your turn. Go get it, even if you don't think you'll like the topic. It's fascinating.
By Julie D. at January 30, 2018