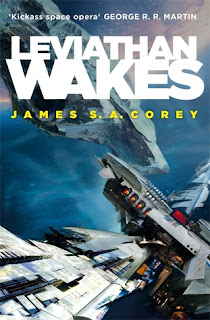 Humanity has colonized the solar system - Mars, the Moon, the Asteroid Belt and beyond - but the stars are still out of our reach.

Jim Holden is XO of an ice miner making runs from the rings of Saturn to the mining stations of the Belt. He and his crew stumble upon the derelict ship Scopuli and find themselves in possession of a secret that someone is willing to kill for. War is brewing in the system unless he can find out who left the ship and why.

Detective Miller is looking for a girl. One girl in a system of billions, but her parents have money and money talks. When the trail leads him to the Scopuli and Holden, he realizes that she may be the key to something bigger than just a missing girl.

Holden and Miller must thread the needle between the Earth government, the Outer Planet revolutionaries, and secretive corporations - and the odds are against them. But out in the Belt, the rules are different, and one small ship can change the fate of the universe.

I couldn't put it down. The combination of space colony/space ship action with the police procedural/mystery proved riveting. It helps that the chapters are short and follow a serial-style cliff-hanger model. This suspenseful space opera is supported by several adventure story arcs within the entire book.

Those made it an exciting story but what made it rise to the 5-star level were the interactions between Holden who is a ship captain whose crew call him a righteous man and Miller, a good detective clawing his way back from an alcoholic abyss in the best noir style. They both want to do the right thing but their ideas about how to do that are very different. Their ideas about how to handle potentially dangerous information are even more different. This leads to brief philosophical considerations for the reader, which are never pushed too hard by the author. They are just set out for us to reflect upon as the exciting story ratchets up.

Yes, I know this came out a long time ago. And I know everyone is reading it right now because of that Syfy show. It took Rose clubbing me over the head with it — totally worth the headache.

Waiting for library to get second book to me. Hurry up, library! Why do you only have 2 copies of this book?
By Julie D. at July 28, 2017