How the Choir Converted the World by Mike Aquilina 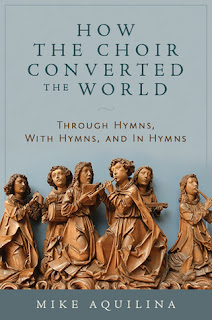 How the Choir Converted the World: Through Hymns, with Hymns, and in Hymns

I often catch myself humming or singing snatches of hymns when I'm cleaning the kitchen. This makes me laugh because I never in a million years would have thought I'd be the sort of person who sang hymns around the house. But it goes to Mike Aquilina's main point.

The [Church] Fathers knew the power that music had over our minds—power over thoughts and feelings—and they respected that power. And they used that power to maximum effect. They knew that beautiful music could change the world. It makes us remember, it moves us to virtue, it heals us, and it makes us one.

The Fathers knew all these things—and one more important thing as well: they knew that music is a foretaste of heaven.

Aquilina talks about the power of music in the context of Jewish and Christian history. These chapters are fascinating and don't feel at all like history lessons. He takes us effortlessly into the times when music permeated the air, both from pagan rituals and Jewish worship as well as everyday life lived in the open. We learn why the Jewish music was unique and how it meant more than just a good tune to get you in the mood to think about God.

As the story continues through history we see the development of music into what we are more familiar with today. I began thinking about the music during Mass in a whole new way. In fact, I broadened my sights and began considering a lot of things in terms of the music which is often integral to them.

This book is really insightful about both music in relationship to human beings and to faith. It was much more than I was expecting from a book which I feared would be more interesting to music professionals than it is to me. I'll be honest. It was not only insightful but revelatory because it made me think about music and how integral it is to us in a way that just never occurred to me.

(I just never think about music at all, honestly. Certainly not like that. Talk about a whole new world.)

Aquilina points out that the earliest Christians used music to tell truths which helped change a violent, ugly, pornographic culture. Our culture mirrors that early one in a lot of ways, sadly. This book helps reorient us so that we can also make and appreciate music which can tell the truth to a world desperate for beauty and truth.

Note: The typesetting and layout are beautiful. That is all too rare these days and that visual beauty is especially complementary to Mike Aquilina's message that the beauty of music helped convert the world.
By Julie D. at December 19, 2016