GENESIS 6-8
Now Genesis brings us to a character who even the smallest child is familiar with, Noah and his ark of animals. When the girls were little and we would read picture books of this story they always were saddened by the animals and people left behind. Truth to tell, I was saddened by those pictures too. I never had a good reason as to why they got left behind. That's because I hadn't yet looked below the surface of Genesis. Get ready to look into Romans for some help with this subject in a way that relates directly to life today. 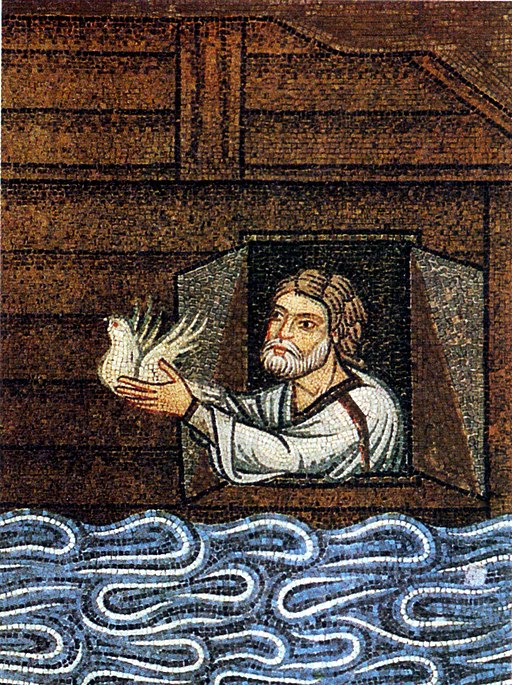 When you read the account of the Flood, realizing that everyone except Noah's family died because of God's judgment, did you ever have a twinge of wondering if that was fair? After all, if some human civilizations developed away from the covenant-keepers, thus becoming intensely evil, perhaps we want to say that they didn't know any better. Maybe we think they never really had a chance to live their lives the way Noah did.

St. Paul, in his epistle to the Romans (1:19-25), helps us to understand better just exactly what was going on among men whose lives were given over to wickedness ...

Here we see that St. Paul says that anyone who lives on the planet Earth, whether he lives among covenant keeping people or not, knows enough about God to live in the right way. Why? Because God has revealed Himself in His works. Looking around at the world in which he lives, a man is capable of recognizing that (1) there is a God (2) He is powerful (3) He deserves to be honored and thanked (Rom. 1:20-21). When a man chooses not to act on what he knows to be true, he suppresses the truth. It isn't that he has been deprived of it-he simply refuses to live by it.

When that happens, things go downhill fast, as St. Paul tells us (Romans 1:28-32) ... This is a description of what happened in the early history of man and what continues to happen when men, like Cain, know what is right to do but refuse to do it. When that happens, the most merciful thing God can do is to punish man. It is often only when men are faced with suffering and death that their autonomy crumbles to ash, and they are willing to cry out to God, Whom they are finally ready to acknowledge as the only One who can help...

The people swept away in the Flood were not necessarily eternally lost. Their death was a temporal punishment until Christ preached to them the message of redemption they needed to hear. Those who were merely ignorant surely responded with great joy. But those who, like Cain, had hardened their hearts through sin, might well have had the same reaction to Christ as Cain had to God — "Thanks, but no thanks." We should never worry about the justice and fairness of God (see CCC 632-635).

Genesis: God and His Creation


When they get to why the animals had to be included the light bulb really went on. This explanation ties in with things I've read in other sources (notably Peter Kreeft's work) which talks about the universe being created for man.


For animals to be included in the cleansing of the earth suggests the inseparable relationship between man and the rest of creation. The dominion God had given him has real meaning — when man goes down, so does all the rest of the earth. This helps us to see clearly how all the elements of creation led up to the creation of man. He was not just one player among many. Without man, the rest has no meaning.

Genesis: God and His Creation


The other question that comes up every time in this classic tale is just how the animals were collected in the first place.


Many have wondered how this animal kingdom roundup happened. Did Noah and his sons spend years collecting all the animals? In reality the creation, along with Noah, was doing just as God had commanded. There seemed to be no problem gathering the animals. God took care of the details of that job while Noah was doing his part by building the ark. Often we do just the opposite of Noah. We worry about details over which we have no control, while neglecting specific areas (such as attitudes, relationships, responsibilities) that are under our control. Like Noah, concentrate on what God has given you to do and leave the rest to God.