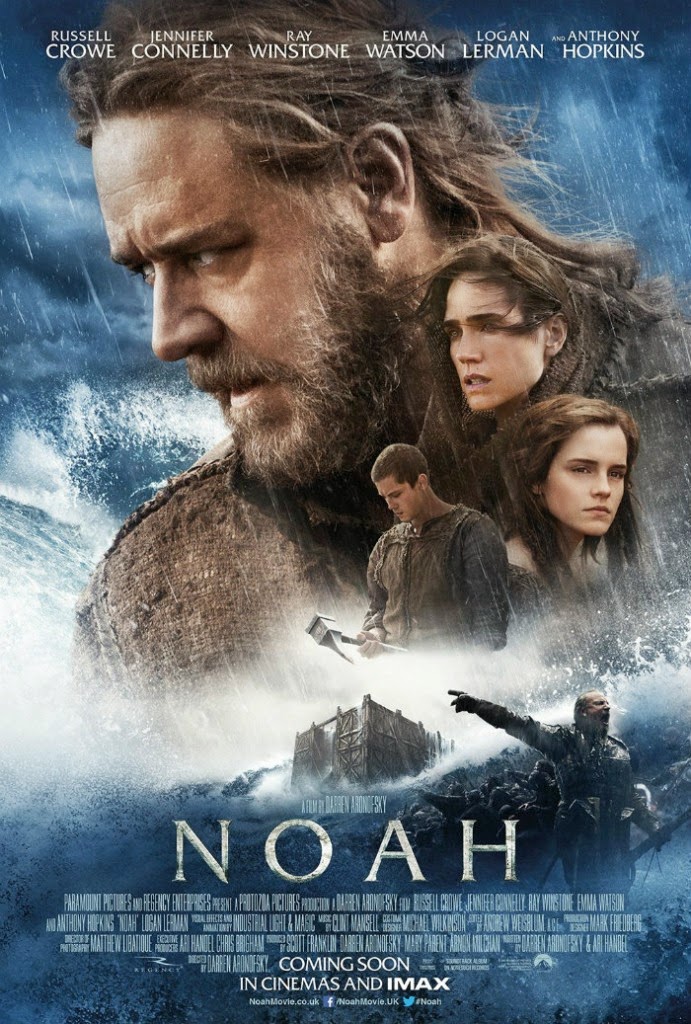 I've been pretty excited about the upcoming Noah movie ever since I heard about it. Then I saw the trailer and got even more excited.

This looked like a classic Bible movie, the likes of which I loved watching as a kid. The Ten Commandments. Ben Hur. You know what I'm talkin' about. Eye popping special effects, miracles, heroic struggles, bigger-than-life stuff.

The fact that we were completely secular and didn't give God a second thought had nothing to do with it. These movies rocked.

I was ready for Noah to rock my world in the same way.

Then I began hearing swirling discontent coming from people who were afraid the movie wouldn't be purely Biblical enough.

This is a Hollywood movie after all.

Film makers have lots of other considerations and even when they've loved a story since their youth, they make trade offs. This was recently called to mind when rewatching all of The Lord of the Rings movies for A Good Story is Hard to Find podcast recently.

Director Peter Jackson made some choices I agreed with and some I didn't. He mentions in the extras that he actually got lost down the wrong track a few times and was able to return to the original message only at the last minute.

In fact, that's not a bad place to start when considering how stories must be adapted to move from one medium to another. Since the Bible was originally oral and then written down, Jewish tradition often chose to keep everything even when it conflicted. They didn't want to throw something out in case it was important in a way they couldn't see at the time.

And from that arose the tradition of midrash. Midrash is a traditional Jewish way of trying to understand the underlying spirit of scripture, sometimes connecting it to modern life, by creating parables. This allows for some imaginative storytelling as rabbis look for interpretations that are not immediately obvious but are nevertheless held within the original text.

I figured that as long as we got a good, entertaining movie Noah would, at the very least, be an interesting modern midrash on the story's applicability to our times.

Steven D. Greydanus, respected movie critic for the National Catholic Register, devout Catholic, has invested a considerable amount of thought into the flap over Noah.


Whatever the movie looks like, I expect some pious moviegoers, especially biblical literalists, will be upset or angry about anything in the film that goes beyond the biblical text, or that contradicts their own ideas about the story, or that doesn’t dovetail with their conception of the message of the Bible.

Is this really necessary? I don’t think so. By way of providing some perspective, here are a few points that I think thoughtful Christians, particularly Catholics, should consider in evaluating Aronofsky’s film and others like it.

We all grow up with this version of the story, we read it to our own kids, and many of us never look at the text any other way. (For example, picture books invariably stick with the “two by two” motif, ignoring the verses that refer to seven pairs of “clean” animals.)

There’s nothing wrong with this familiar version of the story. But we shouldn’t mistake it for the canonical story itself — nor should we be too quick to reject interpretative or imaginative approaches to the text that challenge our assumptions. A retelling that defamiliarizes the story, that makes us rethink what we thought we knew, can be a valuable thing.

Greydanus hits the nail on the head. He's got several good pieces which I read with interest as they came along. If you are curious about why the movie is worth watching, despite not being what might be called "strictly Biblical" then these may interest you also. Heck, they're interesting no matter what.
Here's another piece (WSJ: Ark-itectural Digest) which has nothing whatever to do with controversies, but has everything to do with how the filmmakers combined digital and physical elements for the special effects. For instance they actually built the ark to Biblical proportions. The ultimate test was when Hurricane Sandy came along.


In a clearing within a woodsy arboretum on Long Island, on dry land, Mr. Friedberg's crew spent about six months erecting the front entrance and sides of an ark about 60 feet high, out of steel and foam designed to look like logs. For scenes in the ark's interior, they built a three-story set to the same scale inside an armory in Brooklyn.

"We decided that it would be built to biblical proportions," Mr. Friedberg explains. That means it isn't a seafaring ship but a large rectangular box intended to keep Noah's family and the menagerie afloat, specified by scripture to be 30 cubits high, 50 cubits wide and 300 cubits long (a cubit is the distance from human elbow to middle fingertip). Sunk in a cement foundation, the "ark" was framed in I-beams.

In October of 2012, Hurricane Sandy hit like some kind of cosmic message and flooded parts of New York. "The ark did fine," says Mr. Friedberg. "It enjoyed its chance at some real weather. It did better than some of our own houses."

UPDATE
Other Christian reactions to Noah, all via Brandywine Books.
YET MORE UPDATES
Steven D. Greydanus is turning into quite the authority on the Noah movie. He's being interviewed everywhere, asked tons on questions, and has a couple more pieces written. I'm not reading either of these until I've seen the movie, but wanted to share these links.