A Must-See For Music Lovers: Muscle Shoals - the Movie 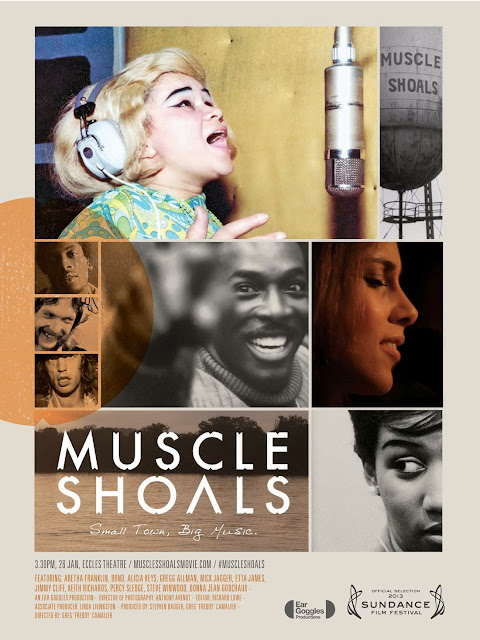 You may not have heard of Muscle Shoals, Alabama. I hadn't.

But you probably know the Muscle Shoals sound by heart. I do.

As wildly varying as those songs may seem, they all are permeated by one indefinable element, known to musicians as Muscle Shoals sound. This is nothing as easily identifiable as the Motown sound, although "funky" is the commonest descriptor. It joyously infuses this documentary, making you want to sing along or, at the very least, dance in your seat. By the end of this film, you'll know what they mean by it.

On the surface, this is the story of how record producer Rick Hall's tiny recording studio produced some of the biggest songs of our times. Star-studded interviews tell both the recording studio's history and that of the musicians themselves who often were sent to Muscle Shoals to find their true artistic voices. However, this film is much deeper than that, with several strands of story that weave through the music to make this a surprisingly layered, deep tale.

It is the story of a man whose life mirrors the blues, of unlikely studio musicians who helped make stars and earned The Swampers as a name, of shattered stereotypes for both black and white performers, of rejection, and of redemption. It is a mirror of America during some of our most soul-wrenching times. This is always done without ever letting us forget the importance of place, of what it meant to grow up and live in that little country town in Alabama.

Beautifully photographed and touchingly told, Muscle Shoals is one of the richest and most satisfying documentaries I've ever seen. The final revelation was finding that the director had never made a film before and was inspired to begin during a vacation to Muscle Shoals. Truly, this little town just turns out one wonderful surprise after another.

And now I finally understand both the words and the significance of these lines from Sweet Home Alabama.


Now Muscle Shoals has got the Swampers
And they've been known to pick a song or two
Lord they get me off so much
They pick me up when I'm feeling blue
Now how about you?

Muscle Shoals will do the same for you. See the movie.

The movie is available at a few theaters around the country but can be streamed in a lot of ways (iTunes, Amazon, YouTube, etc.). Check their site for more: Muscle Shoals: The Movie.

Note: there is an official soundtrack for sale but it is a small percentage of the songs that flow through this movie. We're going to figure out the song list and add on to compile our own complete soundtrack.