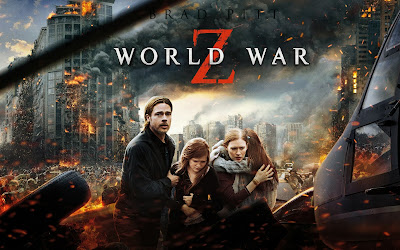 If I were to give this movie a subtitle it would be "Fast, Furious, and Stupid."

It is already generally accepted that the only things the excellent and intelligently written book and this movie have in common are the title. I'm actually ok with that. I just hope that author Max Brooks is making a ton of cash off of this movie.

If watched solely as a big summer Hollywood thriller, WWZ works overall. It is a roller coaster of jumps and adrenaline thrill rides, strung together by the thinnest of logic. Don't turn your brain on and you'll have a wonderful ride.

And, I must admit, viewing it at home, where we could laugh at the dumb stuff, probably compensated for not seeing the visually impressive scenes on the big screen where they must have been truly spectacular.

The biggest problem with the film was that we only had one character to care about: Garry (Brad Pitt). He seemed in peril numerous times, but let's face it, we never too worried because he is the star of the movie. If anyone is going to make it to the end, it is the star and executive producer.

Some people live, many people die, but we weren't emotionally invested in any of them. Garry's wife and children, the fellow soldiers, the other experts ... none of them had enough character development or even camera time to allow us to see inside and care. I think of other thrill-ride movies with solo heroes: Die Hard, The Hunt for Red October (though I suppose we could argue for a dual hero motif in that one), Clear and Present Danger, and Aliens all come immediately to mind. Each of these had likable supporting characters whose deaths would have caused me emotional turmoil, not to mention how the movies' heroes would have felt. We got none of that from World War Z and that's the biggest crime a movie can commit ... robbing you of suspense and just taking you along for the ride.

What I liked:
What I didn't like ... and these are a token few items of the stupid "logic" being used throughout this thing (SPOILERS ... though I don't think these ruin anything and I tried to keep them vague):
I also have two questions:
All that makes it sound as if I hated this movie and I did not. I enjoyed it a lot and gave it three out of five stars at Letterboxd. As I say, it works really well at home with popcorn to throw at the screen (which we had, thanks to my forethought), and like-minded pals to make smart aleck cracks ... or appreciative comments (we liked the use of the soda machine).
By Julie D. at October 01, 2013