Farmer in the Sky by Robert Heinlein 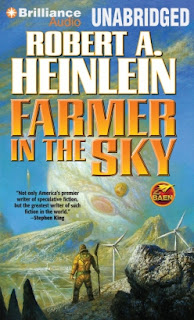 The Earth is crowded and food is rationed, but a colony on Ganymede, one of the moons of Jupiter, offers an escape for teenager Bill Lermer and his family. Back on Earth, the move sounded like a grand adventure, but Bill realizes that life on the frontier is dangerous, and in an alien world with no safety nets nature is cruelly unforgiving of even small mistakes.

I have always enjoyed Heinlein’s tales for juveniles more than his other writing. Having been told many times that I should read this book, I jumped at the chance to review the audiobook for SFFaudio. Bill is an Eagle Scout which comes in handy more than once and which reminds listeners of the original audience. In some ways this is like listening to the Little House books by Laura Ingalls Wilder as Bill details homesteading on Ganymede. Heinlein does a good job of transferring standard pioneer problems and opportunities to a hostile environment in outer space. The tale is absorbing and I really enjoyed every detail of it.

It is funny listening to this book so long after it was written. It takes me back, in some ways, because the protagonist and his father are emigrating to Ganymede because population pressures and lack of available food make life pretty miserable. It isn’t quite as extreme as the movie Soylent Green portrays, but definitely is trending in that direction. If someone made Farmer in the Sky into a movie today, they’d be repurposing it to fit current worries over the environment or lowering birth rates in industrialized countries. It is like a time capsule of past worries, via an adventure/emigration tale.

Nick Podehl’s narration is excellent. I’m not sure how he manages to pull off sounding like a teenager without sounding wimpy, but he does. You get everything from awe at the things Bill encounters, panic at extreme danger, or the annoyance of a teenage boy at his father.

Note: This review originally appeared at SFFaudio.
By Julie D. at March 11, 2013