Trucker Ghost Stories: And Other True Tales of Haunted Highways, Weird Encounters, and Legends of the Road edited by Annie Wilder 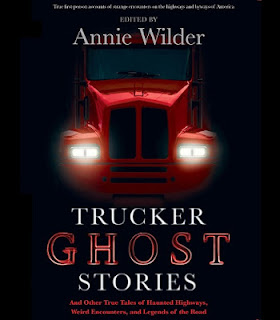 If you're a fan of real-life ghost stories, then this is the book for you.

If you're a fan of truckers, those modern-day "cowboys" of the highways, then this book is doubly for you.

Truckers are on the road at all times of night, in all weather, and, evidently, when every sort of ghost, monster, or UFO is out and about. This collection of stories runs the gamut from terrifying to tame. I was fascinated by the story of a trucker attacked by a UFO full of aliens but who refused to be abducted. I got the creeps listening to the story of a trucker parked for sleeping who was attacked by evil spirits who evidently muffled even his cries for help from other sleepers nearby. Other stories, such as a floating red light, were less satisfying.

As with all "real" ghost stories, it is up to the listener to judge whether these incidents were authentic or due to tricks of light, lack of sleep, or a handful of uppers for the road. Adding to the authentic feel, although not necessarily to any literary value, is the fact that the stories were written by the truck drivers themselves and not professional writers. This leads to a lot of "sign offs" such as "That is my story."

The stories are narrated by Tavia Gilbert and Peter Ganim who have personable styles and will even give the tale a regional twang if the story mentions a city of origin.

What I discovered from this book is that I'm not nearly as big a fan of real-life ghost stories as I thought. Or perhaps it is that listening to a steady dose of them for several hours is just not my cup of tea. If you are interested in the supernatural, paranormal, or just in hearing some straight forward, sincerely told ghost stories, give it a try.

This review originally appeared at SFFaudio.
By Julie D. at February 01, 2013