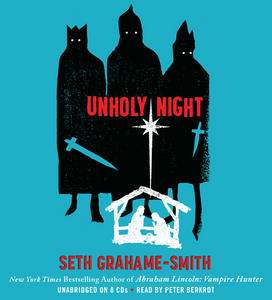 “Joseph? Mary? My name is Balthazar. This is Gaspar . . . this is Melchyor. We don’t want to hurt you . . . we’re just looking for a place to rest. But, Joseph? if you don’t put that pitchfork down, I’m going to take it from you and stab you to death in front of your wife and child. Do you understand?”

Wanted thieves Balthazar, Melchyor, and Gaspar, disguised as wise men, show up at a little manger in Bethlehem with a huge star blazing overhead, looking for a hideout from the law. But when Herod's soldiers begin slaughtering the babies in Bethlehem, Balthazar (a.k.a. The Antioch Ghost) takes the safety of the Holy Family into his own hands. As fugitives on the run to Egypt, they must escape not only Roman soldiers but creatures of mythology and the occult. Everyone's either gunning for the Antioch Ghost with a price on his head or the innocent newborn who has such an unearthly effect on those around him.

Seth Grahame-Smith (Pride and Prejudice and Zombies, Abraham Lincoln: Vampire Hunter) finally stops inserting his words into other people's writing and writes a book in his own words. And a fine job he does of it too. For a violent, gore-filled, action-thriller there are a surprising number of very human characters, many of whom we are meant to recognize.

Pontius Pilate appears as an ambitious young officer ambivalent about truth. Mary and Joseph struggle with how to reconcile the truth of Jesus as God with the reality of a baby who must be fed, loved, and parented. Above all, this is Balthazar's story, who has a complex story-line driving his actions and attitudes. We learn how he became the cynical Antioch Ghost and we wonder if he will find a more worthy goal than vengeance.

Above all, I was surprised to find myself eventually thinking of Unholy Night as modern midrash. Midrash is a traditional Jewish way of trying to understand the underlying spirit of scripture, sometimes connecting it to modern life, by creating parables. This allows for some imaginative storytelling as rabbis look for interpretations that are not immediately obvious but are nevertheless held within the original text.

Grahame-Smith lives up to the midrash ideal by both being respectful to his source material and also using his vivid imagination on a Biblical event that is wide-open to interpretation: Mary and Joseph's flight to Egypt with the Christ child. Among other things, the author is very good at opening new views on familiar subjects, such as just how horrible King Herod was. It brings to life the terrible things he did very much as I have read them in history books. One also gets a deeper understanding of the locals' simmering, resentful hatred of the Roman empire.

Narrator Peter Berkrot is a reader I haven't come across before but will be seeking out in the future. He conveys just the right amount of cynicism as Balthazar, menace and insanity as Herod, and innocence as Mary. I am not sure how this book comes across in print but I'd listen to it again in a heartbeat thanks to Berkrot's narration.

Grahame-Smith has delivered a story of Biblical proportions in Unholy Night: zombies, swarms of locusts, epic sword fights, outlaws, obsessed rulers, vengeance, redemption, and more are in this entertaining action tale. That he did it all while staying true to original material that can be unpopular reading these days makes him a writer I am going to seek out in the future. Highly recommended.

This review first appeared at SFFaudio.
By Julie D. at October 22, 2012