Same Kind of Happy As Me: Reviewing "A People of Hope: Archbishop Timothy Dolan in Conversation with John L. Allen, Jr." 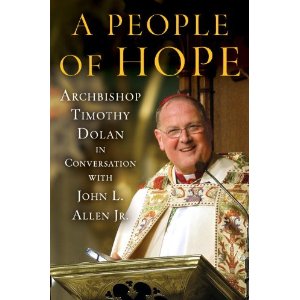 Probably my chief professional frustration is that the Catholic Church I have come to know from the inside—the warmth and laughter one finds in most Catholic circles, the rich intellectual tradition, the vast body of lore, the incredible range of characters, the deep desire to do good, the abiding faith against all odds that thrives even in a secular world, the ability to go anywhere and feel instantly at home, even the love of good food, good drink, and good company—rarely finds an echo in my reporting. I wanted to tell the Tim Dolan story in part because it wouldn't leave me with a sense of dissonance between the inner experience of being Catholic, and the public perception of what the Church is all about.

Who knew that being a happy Catholic was something that has an actual name? John L. Allen calls it "affirmative orthodoxy." In brief, this means holding onto the core elements of classic Catholicism but with the emphasis of what Catholicism embraces and says "yes" to instead of what it opposes.

To show there is more to the Catholic Church than the contentious side that that mainstream media presents, Allen had a series of informal question and answer sessions with Timothy Dolan who is the Archbishop of New York City.

What emerges is the profile of a determined "bridge builder"—so much so that Allen often uses the word pontiff meaning "bridge" in Latin to describe Dolan.

Perhaps the most encouraging thing about Dolan is that his continual optimism is not founded in Pollyanna-style cheeriness but anchored in a tough, clear-eyed reality. He understands why critics are angry, how dreams have been dashed, where the people in the Church have fallen short. Therefore he is able to sturdily defend Catholicism while holding out an understanding hand to opponents so that all have the chance to find common ground from which to work.


What about this case? Two men are in a same-sex union who have adopted a child and want that child to attend a Catholic school. We just had a case like that, and I replied, sure, that child is very welcome, as long as there is a certain understanding. ... we need to be up-front from the beginning. We need to say, "You want your child in a Catholic school, and your child is welcome. But you do realize there might be some discomfort insofar as that at a certain point in their catechesis, the child might learn that the kind of life you are leading might be contrary to the teaching of the Church. You may also want to know that if it becomes public you're leading this kind of life, there may be some discomfort for your child and for you." We have to be pretty blunt from the beginning about some of these things. We also need to say, "When it comes time for your child's First Communion, you may be unable to receive Holy Communion with your child. If you're accepting of all that, then I would be open to accepting the child."

Aren't there analogous situations with parents who are married outside the Church? Or, to take another example, when you have a teacher in a Catholic school who's talking about the sinfulness of the abuse of alcohol, there may be a fair number of kids sitting there thinking, "Wow, she's talking about my dad." In other words, I think it's a mistake to treat homosexuals as a special case. There are all kinds of situations in which people may fall short of what the Church would see as the ideal, and I would hope that in all those cases we can find ways to balance the need to be clear about our teaching with being pastoral and loving in the way we relate to people. If we only took the children of saints in our schools, our classrooms would be empty!

Again and again, we see Dolan acknowledge core differences but then reach out across them to relate to people on a human level. It is refreshing to see him continually begin an answer by mentioning a good quality or friendship with someone who holds views that outsiders see as diametrically opposed.

What we also see is a sense of self-awareness that I initially learned about Dolan when I read his book To Whom Shall We Go? Lessons from the Apostle Peter

. It was a terrific book about examining our lives in Christ by using St. Peter as our guide. It was a review copy and I didn't know Dolan from Adam. However, it was full of reminders focusing readers on St. Peter's strengths and weaknesses and showing the many ancient and current examples that reflect our own tendencies. The person that wrote that honest book was someone I could relate to and trust because he understood people from the inside out. In my experience, that happens only when the person begins with himself.

This honesty extends inside the Church as well as outside. Dolan gives us food for thought about how Catholics themselves stand tall or fall short.


The outsider's perception of the Catholic Church is whatever the latest thing the bishops have said or done happens to be.

You got it. But that's not just a problem out there, it's in here. I went up a couple of months ago to Poughkeepsie, where we had a parish that in its heyday had a school, rectory, gym, the whole deal. Now it's decimated. Over the last year, Catholic Charities took over the old gym and now we've got a day care center on the ground floor and a food bank on the second floor. On the third floor we've got an immigration center that does English language instruction, immigration services, all that stuff, because there's a large itinerant Hispanic population out there. That's been humming for a good year. I went up to bless it and I was just blown away by what I saw. I was talking to the staff, who are dedicated Catholic people, and who are proud of what they've done, but who were also a little critical. Of course they thanked me for being there, but the edge of their remarks was, "Where has the Church been? You're here now after a year, but where has the Church been? Why hasn't the Church been more supportive of this?" I'm getting more and more frustrated, and finally I blurted out, "What the are you talking about? The Church has been here already. You are the Church. This is the Church at its best. This is what we're all about." Of course what they meant was, why hasn't the purple been here for a year? Even our own people are thinking like that. ... My point instead is that we need to flip the perception around—to see the kind of thing that's happening in Poughkeepsie as the real expression of "the Church," not so much wherever the bishop happens to be.

This example in particular spoke to me because I have come across it a lot lately and it never fails to baffle me. Perhaps that speaks more to my experience as a convert than anything, but the Church through the ages has operated that way, up to and including the development of the rosary.

This review is excerpt-heavy but that is because letting Dolan speak for himself is the best way to help you understand these views. Author John L. Allen, Jr., is a veteran journalist and Vatican expert and it shows. Each section begins with three or four pages of expert summary and explanation of the overview of a particular issue. This is followed by the questions and answers. The questions aren't designed to pin Dolan to the wall but rather to allow him to air his views.

It is interesting that Allen chose Archbishop Dolan for the purpose of displaying the affirmative orthodoxy ... or, as I call it, happy Catholics ... in the Church. He has a vantage point and knowledge that few other authors share. I, myself, was forever changed by reading Allen's examples in  All the Pope's Men

of how liberals and conservatives want the same good for all but simply have very different ideas of how to achieve it. That, coupled with an introduction where Allen confessed that he once thought he was an even-handed writer but was shown how wrong he was ... and how he had worked to change ... come to mind to this day when I am faced with situations where bridge-building must be undertaken simply to have a civil conversation. His books since then have been models of lucid, comprehensive, and even-handed looks at aspects of the Catholic faith. In other words, I trust him.

Allen also tells us that one of the reasons he profiled Dolan is because he is and will be important to the American Catholic Church. I suppose that is important but personally I don't care. What this book shows me is a model to follow in extending a generous hand before condemning, in standing firm but in charity when it involves core Catholic values, and in always, always turning back to Christ who founded Mother Church to help us get to heaven. A People of Hope gives me the examples I need and, hopefully, will show curious outsiders that there is more to the Church than the media tells us.