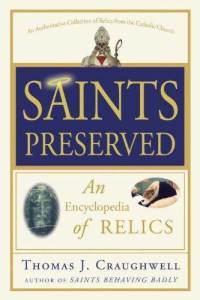 One thing we can count on Thomas J. Craughwell for is looking at a well-worn subject with an unpredictable eye. His previous book, Saints Behaving Badly, told shocking stories of people who later became saints. And he actually managed to shock me, which was quite an accomplishment since I thought myself unshockable.

Now he brings us Saints Preserved: An Encyclopedia of Relics. That's not such a big deal, right? A finger bone here, a lock of hair there, or perhaps a scrap of tunic, all carefully preserved in churches around the world.

Ummm, not exactly. Oh, the fingers, hair, and tunics are included. But I think we can all agree that is just perverse that every time I picked up this book to find a sample to include here, the book naturally opened to the Holy Prepuce, or Foreskin, of Jesus Christ.

You read that right.

Again, I thought myself unshockable. Again I was wrong.

Some people, including Catholics I know, find the idea of relics morbid or unnatural. Craughwell, however, points out that Catholics aren't the only ones who value relics.


Even secular society prizes relics: at the Abraham Lincoln Presidential Library and Museum in Springfield, Illinois, I saw crowds press around a display case that contained the gloves Mary Todd Lincoln wore to Ford's Theatre, stained with the blood of her assassinated husband. No doubt morbid curiosity plays a part, but I believe the desire to see Mary Lincoln's bloodstained gloves represents something deeper—the longing to have a physical connection with one of the greatest men, and one of the most tragic moments, in American history. It is that same longing to connect on a physical and not just a spiritual level that draws the faithful to the tombs of the saints, the houses where they lived, the altars before which they prayed, even the prisons where they were tortured.

I found myself entertained, informed, and inspired by this encyclopedia of relics. It made me think of Butler's Lives of the Saints as I read the brief biographies which covered major events, feast days, and patronage, while telling us where to find relics.

The only thing this book is missing is a patronage index to the saints contained in the book, which would have been very handy. There are occasional photos which were interesting although there were so few that I wondered why there were not more photos or no photos at all.

A great resource that can serve as a quick guide to a saint's biography, a tourist destination choice for those who want to mix relics and relaxation, or personal inspiration ... which was the case for me as I pondered all the varied ways that saints have done God's will over the last two thousand years. Definitely recommended.

I leave you with a sample entry; that of a saint who appeals to me on several levels.

For many generations Isidore's family had served as administrators of the Roman Empire in Spain. By the sixth century, the empire had collapsed, the provinces were i the hands of barbarian tribes, and the entire infrastructure of Roman society was vanishing—its libraries, its roads, its aqueducts, its laws and literature. In a desperate effort to halt the decay, Isidore began to write a massive twenty-volume encyclopedia of all existing knowledge. He included all the arts and sciences; the engineering that made aqueducts and the arch possible; medicine, metallurgy, and agriculture; even how to build furniture. And he urged his people to learn to read. "When we pray," he said, "we talk to God; when we read, God talks to us."

Saint Isidore of Seville is the patron saint of the Internet. Feast day: April 4.