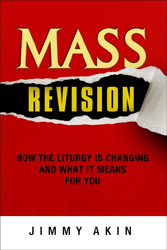 Any time one makes a big change, it can have unforeseen consequences, and not all of them good. That's why newly built boats have shakedown voyages, newly designed computer programs have bug releases, and so forth. It takes a while for a new or changed system to show how it works in practice, and often a little experience with it shows that some tweaking is necessary.

That is essentially what has happened with the liturgy. A big change was made in the 1970s, and from the decades of pastoral experience that followed, Pope John Paul II became convinced that the liturgy could be improved.  ...

... The translation that had been prepared in the 1970s was put together somewhat hastily, and it used a trendy philosophy of translation known as "dynamic equivalence." In this method, a translator tries to take the thoughts expressed on one language (in this case Latin) and bring them into another language without carefully mirroring the vocabulary, word order, or style of the original. ...

Although dynamic translations have some advantages, they also have drawbacks. One potential one is the "dumbing down" or "flattening out" of language that is meant to be noble and elevating. That is one of the concerns of the Missal that was produced in the 1970s. ...

Jimmy Akin's blog is one that I have long counted on for straight answers about Church teachings when I couldn't easily find the answer elsewhere. Soon after I entered the Church, the U.S. bishops issued a General Instruction of the Roman Missal (GIRM), designed to set up norms of worship around the U.S. The actual result was hotly disputed issues about things like taking communion on the tongue or in the hand, taking communion kneeling or standing, and having to stand and sing after communion instead of being allowed to kneel and pray. I always appreciated Akin's straight forward answers, supported by canon law, Church teachings, and other documentation. I never read it, but I knew that Akin even wrote a book, Mass Confusion, to instruct laypeople about liturgical law so they could see for themselves what was allowed and what wasn't.

Over time those questions seem to have have settled down. However, with the upcoming changes to the liturgy there is great potential for people to resent the revised liturgy replacing the one they love. My interest was piqued when I saw that Akin has a new book covering the changes, Mass Revision: How the Liturgy is Changing and What It Means for You.

It turns out that Mass Revision is a hugely revised version of Akin's previous book, Mass Confusion, but now focused more on the liturgical revisions than on abuses. I worried that the tone of the book might be strident, considering the previous focus on abuses, but nothing could be further from the case.

Akin calmly and clearly takes readers through the Mass step by step, detailing on the way where changes are being made and the logic behind them. I was pleased to see that his commentary actually serves as a thread binding together excerpts from various Church documents which are the genesis for the liturgical instructions. It was fascinating to see how many documents supported each other each step of the way. Also, in reading the actual excerpts I was often touched by the care shown to the faithful, the reverence for the Eucharist, and the practicality of the result.

Akin's comments serve as a guide, clarify possibly contentious points, and also give us helpful reasons as to why something may be misunderstood, as we can see in this excerpt.


Final Prayer over the Gifts
Following the lavabo, the priest directs the people to pray. The rubrics of the Mass state:


Standing at the middle of the altar, facing the people, extending and then joining his hands, he says:


Pray, brethren (brothers and sisters),
That my sacrifice and yours
May be acceptable to God,
The almighty Father.

The people rise and reply:


May the Lord accept the sacrifice at your hands
For the praise and glory of his name,
For our good
And the good of all his holy Church.


The faithful should stand ... from the invitation, Orate, frates ("Pray, brethren"), before the prayer over the offerings until the end of Mass, except at the places indicated below. (GIRM 43)

When the General Introduction was first released, people read this passage and assumed it meant that the congregation was to stand from the beginning of the invitation "Pray, brethren." Instead, as the rubrics of the Roman Missal (quoted above) make clear, they are to stand at the end of this invitation to pray. It is only after the priest has said "the almighty Fahter" that the people "rise and reply."

This sequence is also indicated later in the General Instruction itself:


Upon returning to the middle of the altar, the priest, facing the people and extending and then joining his hands, invites the people to pray, saying, Orate, frates ("Pray, brethren"). The people rise and make their response: Siscipiat Dominus ("May the Lord accept"). Then the priest, with hands extended, says the prayer over the offerings. At the end the people make the accalamation, "Amen." (GIRM 146)

However, this passage was overlooked as people focused on the previous passage. Because the first passage is found in the section of the General Instruction dealing specifically with posture, it is understandable that people would focus on that one and miss the implication of the later one. Nevertheless, it caused substantial discomfort as the faithful tried to guess when the priest was about to start the invitation so they could stand immediately beforehand.

The copious bonus materials comprise the final hundred pages of the book and cover everything from the Outline of the Mass to Low-Gluten Hosts and Mustum to Table of Postures During Mass. This is going to be my go-to resource when a specific question comes up for clarification.

The promotional materials and the back of the book seem to focus on liturgical abuse before pointing out that Mass Revisions above all describes and clarifies the liturgical revisions. I know this may be Akin's reputation but don't allow it to put you off as it almost did me. This book really does exactly what the subtitle says: how the liturgy is changing and what it means for you.