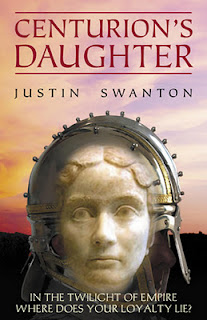 Her Frankish mother dead, 17-year-old Aemilia arrives at Soissons in Roman Gaul in search of her Roman father whom she has never met. She knows only that his name is Tarunculus and that he is a former centurion. She finds an old man fixed on the past, attempting in vain to kindle a spark of patriotism in his dispirited countrymen. Soon, Aemilia is caught up in her father's schemes to save the Empire and the intrigues of the Roman nobility in Soissons. In the war between Franks and Romans to decide the fate of the last imperial province, Providence will lead her down a path she could never have imagined.

Centurion's Daughter is a well written piece of historical fiction set in Gaul (France) when the Roman Empire was in its last gasps.

It is a time period I know little about but was soon more educated in as Aemilia's story was told. Aemilia herself was an interesting character, reminding me more of Saint Monica than of the more common spirited, assertive female usually seen in today's historical fiction. Aemilia was completely dependent, in turn, on her father, a local member of nobility, Soisson's bishop, and various other authorities. She usually had no choice but to do what she was told if she wanted to have clothing, food, and housing. However, as happens in real life, her natural character shone through and impulsive comments or acts of kindness would draw different influential characters' attention to her. They may have used her abilities for their own purposes but Aemilia's own goals were often served in the process. I found Aemilia a most appealing character and the way of telling her story to be refreshingly subtle.

In addition, the story seems carefully researched and the author brought this time period alive. Other characters in the book are equally well sketched with minimal description so that readers see the full gamut of personalities scheming to achieve their own goals while saving the little town of Soissons.

I suppose one could call this a YA book but it held my interest the entire time, as any well written book would regardless of intended age group. Highly recommended and I look forward with interest to seeing what Justin Swanton writes in the future.
By Julie D. at October 06, 2011