Going to the Heart of the Matter: Reviewing "Catholic Mass for Dummies" 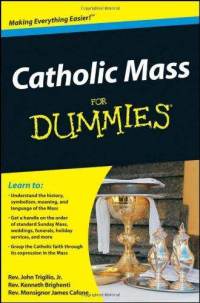 For the Ordinary form, the Roman Rite uses the following colors:
[...]


I originally became interested in Catholic Mass for Dummies because it might help with answers for our RCIA small group. I learned to trust authors John Trigilio and James Cafone when reading Catholicism for Dummies which was wonderfully informative and also carried the Nihil Obstat* and Imprimatur*.

Joined by Kenneth Brighenti, the same authors have joined forces again to provide this practical, step-by-step guide to the Catholic Mass. This book also has the Nihil Obstat and Imprimatur and is fascinatingly informative. The authors not only take us through the standard Roman Catholic Sunday Mass, but also variations for such needs as weddings, funerals, and the like. At pains to explain the history, symbolism and meaning, they also explain the changes to Mass responses which will be instituted when the new liturgical translation begins being used in Advent.

As well as explaining the structure of the Mass, they also discuss the Extraordinary Form of the Mass (Latin Mass), the Liturgy of the Hours, Eucharistic Devotions, and the Byzantine rite Eastern Catholic Divine Liturgy. I admit I was fairly stunned to realize that I could take this book to a Latin Mass or Byzantine Mass and follow along. They include all the actions and words of the priests and people for both. The other Catholic rites from East to West are described with the history for everything from Armenian to Dominican to Anglican covered.

In the Tools of the Trade section, we learn about the books, vestments, vessels, architecture, art, and music used in worship. This was one of the most interesting sections to me since much of the symbolism inherent in these items is that which I only knew dimly or guessed at. This section would have been much enhanced with simple sketches or photos of the items being discussed. We may know what a tunic is but an amice is something that I just can't call to mind, no matter how detailed the description. Again in this section as in the rest of the book, the authors take care to call out differences practiced in the different rites of the Church.

I especially liked that the authors were reporting the information and not giving any personal opinions. This makes the book especially useful to the wide variety of people who might be drawn to it, whether the merely curious, Catholics, potential converts, or those with specific questions about a particular practice. This is intended as a reference book and deeper theological reflections, therefore, are not found here. However, just knowing the symbolism that stretches back to the beginning of the Church is often enough to prompt the reader to their own reflections, which I found happening as I read.

There are times when we all just need to know what's going on before we dig deeper. I can think of no better place to find one's footing with the ins-and-outs of the Catholic mass than in this book.


The unalterable importance of the altar
The altar is not only the place where the Holy Sacrifice of the Mass is offered, it also represents and symbolizes Christ himself. At the beginning of Mass, the altar is always reverenced by the clergy who are concelebrating by bowing before it and kitting it before going to their respective places. Before the introductory rites start, the main celebrant, escorted by one or two deacons, may incense the altar in a very dignified and elegant movement around it. The altar is also reverenced with a kiss at the end of Mass.

All immovable altars must have altar stones, slabs of stone about the size of a netbook computer. The altar stone is placed on a full size altar (made of marble or wood). Under the stone are relics of one or more of the ancient martyrs. Even though the altar is covered with linens during Mass, the bread and wine are placed on top of the linens over the altar stone. The idea is that Mass will be celebrated over the remains of the martyrs, just as was done for three centuries when the early Christians had to worship in the catacombs to escape Roman persecution.

* Official declarations that a book or pamphlet is free from doctrinal or moral error. No implication is contained therein that those who granted the Nihil Obstat and the Imprimatur agree with the contents, opinions, or statements expressed.
By Julie D. at October 26, 2011