For I Was Blind But Now I See: Reviewing "Jesus and the Jewish Roots of the Eucharist" by Brant Pitre 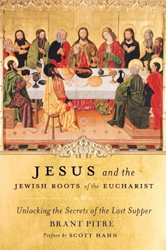 You've got to have proper context to really understand anything well. It's a lesson I seem to have to learn repeatedly.

Years ago our family hosted a Japanese teaching intern who could not comprehend most of the jokes in "The Simpsons." They were so cultural that they flew over her head. We'd never given context a second thought until that point. More recently, we learned that when we thought our dogs were simply playing, they were actually acting upon a complex pack hierarchy. Watching with our eyes newly opened, we suddenly understood why the gentlest dog always got his way. The other dogs all knew what we didn't: he was the pack leader.

When I converted to Catholicism, one of the most joyful, enriching experiences was learning that there were more levels of context to scripture than I would have dreamed. Obviously parables about weddings, seed sowing, and wineskins required explanations of customs of the day for full understanding. However, the more I learned about what lay contextually behind seemingly simple concepts, the more eager I became to learn as much as I could about the faith.

No statement ever needed context more than Jesus' statement that leads directly to the key Catholic teaching that the Eucharist consumed at every Mass is truly the body and blood of Jesus Christ.

Those words taken without context might lead some to think Jesus was advocating cannibalism, or only speaking completely symbolically. Brant Pitre's Jesus and the Jewish Roots of the Eucharist, however, will put the rest to that notion, and will make even those Catholics who believe they have fully explored and understood church teachings on the Eucharist feel like they'd been merely scratching at the surface of this deep and mysterious gift.

The belief that consecrated bread and wine can become the Body and Blood, Soul and Divinity of Christ is hotly disputed by non-Catholics. It can be supremely difficult to defend when encountering a well-prepared challenger, as Brant Pitre discovered while a college sophomore. Shaken to the core by an attack on Real Presence, which he had never questioned, Pitre changed his major and became a biblical scholar. As his knowledge grew, he realized that the key to understanding Jesus' words, deeds, and identity was in his Jewish roots and the Jewish people to whom he proclaimed his message.

Pitre began concentrating on 1st-century Jewish history to bring context to everything that Jesus taught about the Eucharist; this brought Jesus' teachings into hi-def focus in a new and fascinating way. What readers of Jesus and the Jewish Roots of the Eucharist will find are surprising revelations that add a powerful, exciting depth to everything about Jesus.

Pitre builds his case painstakingly, so that readers clearly understand what the Jews would have believed that God promised about the Messiah, the new Moses, the new Passover, and new exodus. He demonstrates how Jesus' words and actions reflected the foundational expectations of the Jews, and pointed toward his role as Messiah, the fulfillment of them. He then shows how the apostles, Church Fathers, and the Catechism all refer to these key expectations as well, although they are not usually spelled out in a way that modern believers find easy to identify. Those authorities knew the ancient sources very well, while the average modern Catholic lacks the same informing context.

Pitre invests all of this with an immediacy and accessibility that will deeply impress any interested Christian. His research challenges many modern purveyors of "historical" biblical exploration, and even those who think that they know the sources well will find surprising depth and details brought to light, including:
There is a thrill of discovery at seeing the pieces fall into place, and that makes the book a surprising page-turner; the reader eagerly wonders where the next revelation will take them. Jesus and the Jewish Roots of the Eucharist makes it crystal clear why ancient Jews and early Christians alike understood Jesus' outrageous claims about the Eucharist, that he is truly present in it now and forever.

This book made me look at the Eucharist and Jesus' promises with new eyes and new appreciation for the truth hidden in plain sight in the Catholic Church. It answers the question that Brant Pitre encountered so long ago as a college student, "How can you Catholics teach that bread and wine actually become Jesus' body and blood? Do you really believe that?"

Beginners or scholars, believers or atheists, Protestants or Catholics, skeptics or the faithful can now follow the inescapable logical reasoning of Pitre, which leads to opened eyes and an emphatic "yes."

This review ran initially at Patheos as part of their book club.
By Julie D. at March 11, 2011