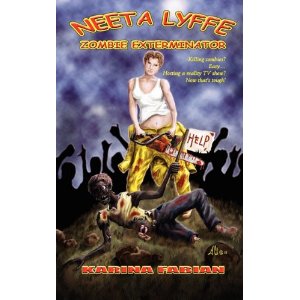 , is a fun romp through the zombie genre that is more akin to Shaun of the Dead than to the more "serious" zombie books I've read (World War Z, The Reapers Are The Angels).

The zombie apocalypse is actually somewhat in balance at the point in which this book takes place. Neeta Lyffe is following in her mother's footsteps as a zombie exterminator. Due to some legal problems she is in need of extra income which is why she agreed to participate in a television reality show in which she trains wanna-be zombie exterminators. The winner will win a million dollars and the others, should they survive, will have been trained in a useful occupation. Naturally, each person has their own reasons for wanting this training and we see a bit below the surface into each person's motivations. Neeta herself loathes the necessity that made her agree to the series but is determined that each person will be properly trained. This puts her into direct opposition with the show's producer who is all about the visual thrills and exploiting every emotion to titillate viewers.

Author Karina Fabian is very imaginative in her creation. For example, the zombies are repelled by common household cleaners. They have some dregs of habit left when they rise from the grave which makes them inclined to "visit" their loved ones or drawn to cultural icons they used to frequent. This is an amusing twist which Fabian exploits for full comic or adventure value as needed.

Fabian is Catholic but repeatedly mentioned that the book is not Catholic. True enough but there is a solid worldview beneath this fantasy which Catholics will appreciate. I know that I did.

I truly enjoyed this light, amusing book. I became invested enough in Neeta to worry that she might be dating the wrong person, to worry about who might die in the ending climax, to become annoyed with the troll that haunts a fan forum for the show. It is a quick read, but one that I anticipate rereading whenever I need a lift in spirits. My review copy was a Kindle file and I'm putting the actual paperback on my wish list so I can have a real hands-on book on my shelf.