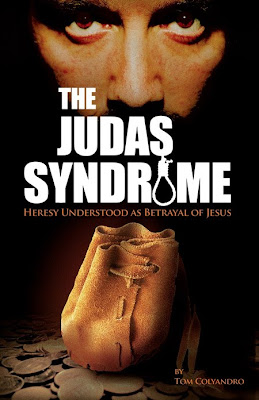 We have all heard of ancient heresies from the time when the Church was new and when the Church Fathers were considering what the revelation of Jesus Christ meant to Christians. However, there is a great tendency to think of those heresies as things that were dealt with and that went away. Who these days is called upon to point out the mistakes inherent in Pelagianism, Origenism, or Macedoniasm? As it turns out, all faithful Catholics are called upon to do that very thing. We just don't see the connection between ancient heresies and their modern manifestations.

The Judas Syndrome does great service to Catholics in examining several major heresies from the past and revealing at how they are still at work in modern culture. What author Thomas Colyandro reveals is that the great historical heresies were not begun by people who merely misunderstood truth or "meant well" but began as willful betrayals of Christ and the Church, hence the name of the book.

The book focuses on seven heresies, with each chapter examining a different heresy indepth. Colyandro begins by stating a Church teaching and then briefly stating the origin and summary of the heresy against that teaching. He then clearly traces Old Testament precursors and New Testament fulfillment in Christ of Church teachings as the reasoning behind Church positions. This prepares the reader for the inherent problem with the heresy under examination.

The origin and history of the particular heresy are then examined. Responses from Church defenders are given, ranging from apostles to Church Fathers. In all instances, Colyandro quotes excerpts that make it easy to see just what is at stake. In fact, when reading some of the Fathers' refutations of particular heresies I would feel a shock of recognition because they were discussing behavior I had seen in people around me.

Finally, modern examples of the heresy's development in our culture are revealed. This is when the reader receives confirmation of suspicions about modern heresies that had been building during the chapter. As well, there are often other examples tied in which have been in existence for so long that the reader may well have not thought to question it. Thanks to Colyandro's careful unfolding of the path a heresy has taken from the very beginning to our own lifetime, readers are given the tools to help recognize them and to begin refuting them.

The book's conclusion discusses the liturgy as an antidote to the Judas syndrome. Colyandro takes the reader back to Christ, to the apostles, to the Church Fathers, all of whom never forgot that the main point was God's desire for an intimate relationship with us. The liturgy is the final expression of that key point and Colyandro takes great care to make it crystal clear that the liturgical requirements are in place specifically to keep us in communion with Christ.